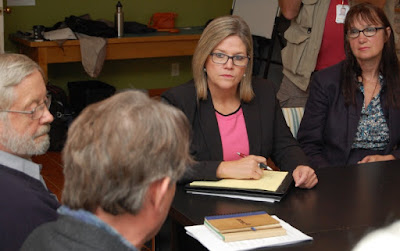 On the third floor of 10 Carden Street this afternoon, Guelph's water advocates continued the push to protect area aquifers from water bottlers by meeting with Ontario NDP leader Andrea Horwath. For Horwath, the goal of the closed door meeting was to work with community members to draft a "broad water strategy" as opposed to a "knee jerk reaction."


"Water is a public trust. Under an NDP government, an Ontario Water Strategy will prioritize planning for water needs now and for the future based on public interest, and sustainable access to water," Horwath said to the press after the meeting. "A particular focus of the NDP's Water Strategy will be transparent and public review of the Permit-to-take-Water process, to ensure that the needs of the public come first," she added. "This has to be about good stewardship and sustainability. Simply increasing the price isn't the answer."
The point of the Ontario Water Strategy, Horwath said, was to start developing a policy while the issue is a hot topic in the minds of Ontarians. Among the initiatives developed so far include the creation of an inventory of provincial water as well as its use and return, creating assurance that communities have the water they need for sustainable growth, and the creation of a transparent and public review process for all applications by companies wanting to take water in Ontario.
In other words, the problem is bigger than what's going on in Aberfoyle, and that was the substance of the discussion with the round table.
"We talked in broader terms about what government needs to do in order to make sure that the public trust is held to the utmost importance [...] We have a province right now that needs an overhaul in the way we see water and the access to clean water," Horwarth said of the meeting with community members like eMERGEs Evan Ferrari, University of Guelph professor Hugh Whiteley, former NDP federal candidate Bobbi Stewart, and city councillors James Gordon and Phil Allt.
"There are many, many types of companies that are water takers," she explained, adding that it's not realistic to ban all taking of water, but taking water putting it in a plastic bottle is a unique case. "It seems we have to think carefully about how we access clean water for our own consumption and whether we want to have so much reliance on bottled water, which simply leads to more plastic in the landfills, and going down through the chain of environmental problems."
"That's why we want to frame this as water should be a public trust," Horwath added. "We have to make sure that people have clean drinking water, water to provide for agricultural uses, to grow food, and that every Ontarian has access to the clean water they need. Those have to be the kind of overarching principles and everything else comes after."
When Guelph MPP and Treasury Board President Liz Sandals waded into the issue yesterday, she said despite the vocal concerns of many of her constituents, their points of view "actually turn out to be based on misinformation," according to the Canadian Press. Horwath accused Sandals, and the Wynne Liberals, of being out of touch.
"I have to say I was quite shocked to hear the tone of [Sandals] response because it seems to be the experts are the people, and the government needs to listen more to what people are saying," Horwath said. "Ontarians, whether it's here in this community or all around this province, really do value clean water and they are the ones ringing alarm bells. That dismissiveness from the MPP for this area had is very, very alarming because what it says is she's getting information from some sources, but not paying attention to what the people in this community are trying to articulate to her, and that's worrisome."
Of course the problem of bottled water is not a one-sided affair, so Horwath has asked about the other half of the equation, what can be done about the public who keep buying bottled water by the case at a rate of 20 per cent growth per quarter.
"There have been campaigns in the past, particularly from municipalities themselves, encouraging people to use the tap water, and realize that tap water is water you can drink and water you're already paying for actually," Horwath said. "People I think need to start taking that seriously because if were going to tackle the situation that we have right now in terms of concerns around water-taking, then we have to recognize our own personal responsibility."
Posted by Adam A. Donaldson at 4:00 PM