Citizens Brainstorm the Path to Good Growth in Guelph 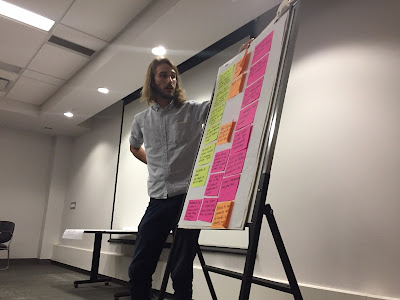 On Thursday night, a group of about 50 people took part in the Good Growth Guelph town hall at City Hall. The event, which was really more a working group, drew many different types of people including activists, teachers, architects, developers, various business people and a even couple of city councillors. The intent: to collaborate on the ways and types of growth they want to see in the Royal City before a council meeting at the end of the month on the subject, and before public comment is due at the Ministry of Municipal Affairs by the end of October.
The areas of discussion were water; climate change; culture and community; agriculture; neighbourhoods and homes; jobs, employments and business; and infrastructure, policing, transit and waste management. The nearly five dozen people in attendance were organized into small groups where they discussed how they'd like to see those areas developed as Guelph grows by another 50,000 people by the middle of the century. Here's some of what came out of those discussions in point form, so of which came up multiple times among the various groups...
Posted by Adam A. Donaldson at 9:00 AM

I was disappointed I couldn't make this, but am glad to see the points people came up with. I am very surprised and quite pleased in the content.