Committee of the Whole Preview - What's on the Agenda for the October 3 Meeting? 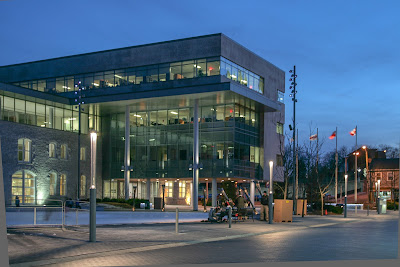 Monday is city council's second Committee-of-the-Whole meeting, and observers are hoping that all the kinks were worked out in September. This month, the committee will tackle issues from Public Services and Corporate Services.


PRESENTATION Trees for Guelph with James Taylor - Bringing together the combined tree-hugging power of the City, local school boards, the Co-operators, Guelph Hydro, local businesses, and over 5,000 volunteers, the Tree for Guelph program aims to, yes, get more trees in Guelph. There presentation will outline recent community engagement and tree planting efforts, and update their efforts on behalf of the 20-year Urban Forest Management Plan. The goal is to give 40 per cent of Guelph an urban tree canopy, and we're presently at 28.6 per cent (as of 2014), and of the available planting space, 52 per cent will have to have a tree canopy. Trees for Guelph is also looking ahead to Canada 150, and engaging the city and private land owners further in the canopy project.
PRESENTATION Libraries Matter with Steve Kraft, Library CEO - Kraft will outline a 12-month campaign being undertaken by the Guelph Public Library system called "Libraries Matter." The goals of the campaign include communicating the role and impact of libraries, stimulating conversations on why libraries matter to citizens, and laying the groundwork for sustained community support. The first part of this is already underway with a five-minute survey that can be found on the library's website.
COW-CS-2016.3 Advertising Acceptability Policy - The City makes money off advertising on City property, on buses and in bus shelters, and in City publications, but in accepting paid ads and advertising agreements, staff has had to use their own subjective measurements. No more! In 2014, Council asked staff to develop an advertising acceptability policy to set universal standards for what the City would find acceptable in advertising, while observing all application rules and legislation. Staff reviewed policies from 12 Canadian cities, and consulted various departments, the communications staff, and the City solicitor to craft the new policy. As well the new policy is consistent with the Canadian Code of Advertising Standards, and the City's strategic goals. No financial cost is tied to the implementation of this policy, and if Council approves it, the policy will go into affect right away.
COW-CS-2016.4 Business/Service Review Framework - This topic will be the one to watch Monday as many, both on council and off it, have been asking for a service rationalization plan to be undertaken for years. The goal with this review is to provide service efficiency and effectiveness, research and develop methods for an internal process to achieve, and develop a business/service review framework. The review will look at service basics, service levels, improving services, and alternate service delivery by focusing on relevance, effectiveness, and efficiency. Each area will conduct a service inventory with various performance measurements to be completed by the second quarter of 2017, with a prioritization framework to come back by the third quarter. A plan for implementing the review will come back before the end of the year.
COW-CS-2016.5 Annual Update for Project Management Office and Deloitte Capital Risk Assessment Recommendations - Over the next 10 years, the City will spend nearly a billion dollars on over 300 capital projects. That's not small potatoes, so more transparency and accountability in terms of project and risk management has been asked for. A Deloitte audit has recommended that the City develop and implement a capital project portfolio management framework that lists projects by one of three tiers based on set criteria; that a project management office be established to develop standards, guidelines and principles to support council decisions; and, to develop and implement a formal risk management process. The proposed project management office would be a part of the City's Corporate Services branch.
COW-PS-2016.1 Optimal Resource Deployment of Emergency Services - Guelph Emergency Services has undergone a review to identify how best to reorganize and redeploy fire and paramedics over the next 10 years: phase I (2017-20), phase II (20-23), and phase III (23-26). On the Fire Department side, the biggest issue is around the headquarters station, which the report recommends to be made a phase I priority. On the paramedic side, the important thing is setting up a base in the downtown, as well as the relocation of the Hillsburgh station, and an expansion of the hours for the emergency response unit.
COW-PS-2016.2 Land Ambulance Response Time Performance Plan for 2017 - The response time of Guelph's paramedics, as compared to their 2015 response time, was improved overall from 2014, but they were unable to meet the performance targets set by Council for the most critically ill and injured patients. There are six levels measured by Canadian Triage Acuity Scale CTAS 1 (requires resuscitation i.e. cardiac arrest), CTAS 2 (requires emergent care i.e. major trauma), CTAS 3 (requires urgent care i.e. mild shortness of breath), CTAS 4 (requires less urgent care i.e. minor trauma), CTAS 5 (requires non-urgent care i.e. sore throat), and Sudden Cardiac Arrest. Council will have to look at ways to improve paramedic performance further in the 2017 budget process.

COW-PS-2016.3 Taxi, Limousine and Second Hand Goods Licensing (Transfer from Guelph Police Service) - As of January 1, 2017, the City of Guelph will take over from the Guelph Police Service the administration and enforcement of taxicabs, limousines, second hand goods vendors, salvage yards/shops and gold/jewelry dealers. The police have said that these responsibilities are "not a core duty" of the service, and have said that the City is better established to manage the service. No new cost savings are expected from the move.
COW-PS-2016.4 Business Licensing By-law Review, Food Vehicle Schedule and Temporary Food Sales - This is an update on the finalization of certain provisions of the new by-law for food trucks and trailers. The planned zoning amendments are expected to come back to council for approval sometime later this fall, the new monthly fee structure has been implemented, and the guidelines for allowing food trucks in city parks is being finalized.
COW-IDE-2016.9 Municipal Support for Local Renewable Energy Projects: Independent System Operator Feed-In-Tariff 5.0 - Staff are seeking Council's approval of a Blanket Support Resolution for new energy projects that are trying to get approval from the Independent Electricity System Operator (IESO) and Feed-In-Tariff (FIT) program.
Posted by Adam A. Donaldson at 11:30 AM