Loss of Ridership, Revenue During Summer Means No Free Rides for Storm Fans 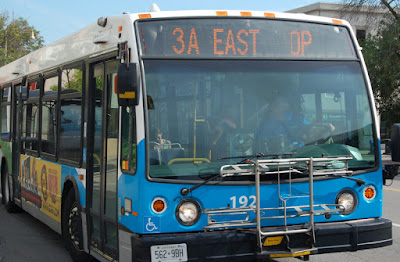 The Guelph Storm celebrated their home opener this past Friday, and fans are hoping for a better season of hockey than they got last year. Some fans were also probably hoping to take advantage of Free Ride Fridays, a promotion by Guelph Transit to give free rides on game nights to ticket holders, but those fans likely got a rude surprise because Transit is no longer taking hockey tickets as currency when the Storm are in town.
Free Ride Fridays, which have been a part of hockey night in Guelph for the last several years, has allowed people going to the game to travel to and from Downtown Guelph by showing their tickets instead of the cash fare, but the offer hasn't been extended this year. Why? Not enough money in the kitty, says Guelph Transit's general manager.
"The decision was made based on the current situation, the loss of ridership and the loss of revenue, to not renew the contract," said Phil Meagher. "We're under pressure to come in on budget, so we had to look at every program that we offer in order [to save money]."
Free Ride Fridays were a program separate and apart from any other agreement, contract or business arrangement between the City of Guelph and the Guelph Storm organization, Meagher explained. The Storm didn't contribute any funding to Free Ride Fridays, and Meagher said that Transit can't afford to not collect that $6 round trip fare from those going to the Storm game this year.
"What you have to remember is that gestures sometimes cost money," added Mayor Cam Guthrie. "There are needs and wants, and council has to grapple with that on the whole, and staff does too, and we have to look at everything through the lens of what's affordable."
Although Meagher didn't have exact figures about the extent of the losses over the summer, but a budget report from Transit is expected to come to council sometime next month. He did note that ridership and revenue figures took a dip from the average from May through August, not coincidentally when Guelph Transit was not offering its peak service, and when the press and social media were filled with complaints of late buses and missed transfers. Guthrie noted that there was a "perfect storm" in May when two arterial roads were closed for construction almost simultaneously with the beginning of peak service's hiatus. Typically, Transit ridership goes down over the summer months, but the seasonal loss is budgeted for by looking at year-over-year averages.
So for now, Storm fans riding the bus will have to pay their $3 or use their bus pass, although there is a sign of hope. "I still believe it's something we should look at," said Guthrie, who noted that the matter could be brought up by himself or another councillor at a future meeting of council or during the budget process. The mayor does note though that there is something that the City should have done immediately.
"When something like this happens in the city, positive or negative, it should be communicated better," said Guthrie. "We really should have been more proactive, ant that's something that's being talked about now by me with the staff." In the meantime, the Guelph Storm are still promoting Free Ride Fridays on their website.
Posted by Adam A. Donaldson at 5:30 PM

What a load of crap. Media reports differ from this. City needs to apologize to Guelph Storm fans for this hot mess.