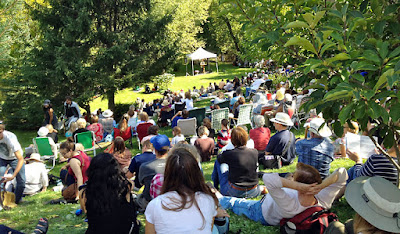 Way back in 1989, Governor General Award winner, and Eden Mills, ON resident, Leon Rooke was releasing a new book. The proprietors of the Eden Mills General Store suggested that Leon hold his book launch on their lovely front steps, but for such an ostentatious venue, Rooke felt his own literary  presence wasn't enough. So he invited other literary icons Rohinton Mistry, Michael Ondaatje, Jane Urquhart, and Linda Spalding to join him. It was, in effect, the first Eden Mills Writers Festival, and it's still going strong.
Since that little porch party 27 years ago, Eden Mills Writers Festival has grown to be one of the most preeminent literary events in the country, and an appointment every September for local book lovers, authors, and aspiring authors and writers. Despite much discussion about the imminent death of the printed world, it seems digital can't land a killing blow against the physical book, and while there are modern struggles for publishers and authors, people still love their books. And they love talking about them and talking with authors at Eden Mills.
I reached out to the festival and got in touch with artistic director Susan Ratcliffe. Ratcliffe is a long time volunteer with the festival, and we do mean volunteer; 99.9 per cent of the people that put together the festival every year are doing it for the love of books. Talking with Ratcliffe we discussed the power of the written word and the continued draw of that literal page turner, how the festival maintains its old-fashioned feel, the importance of a festival like this to authors, and what keeps her coming back for more year after year.
So let's jump to the ending, and get into this week's Guelph Politicast.


You can learn more about the Eden Mills Writers Festival at its website, where you can also get a list of authors and the schedule of events and readings. You can also follow them on Facebook, Twitter, and Instagram. You can get tickets at www.emwftix.ca  or by them in person downtown at the Bookshelf.
The theme music for the Guelph Politicast is from the KPM Klassics collection by Syd Dale.
The host for the Guelph Politicast is Podbean. Find more episodes of the Politicast here.
Remember that the Politicast Podbean channel is also the host for podcast versions of Open Sources Guelph. The previous Thursday's episode of Open Sources will be posted on Mondays.
Stay tuned for future editions of the Guelph Politicast!
Posted by Adam A. Donaldson at 2:30 PM