Downtown is Cool with the Change in Hillside Dates 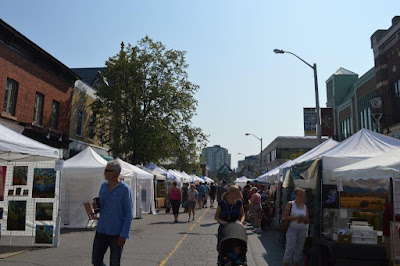 As reported in the Guelph Tribune the other day, the Hillside Festival is conceding victory to WayHome after two years of struggle against the upstart music festival just a few hours further away than our own Guelph Lake. The 34th annual Hillside Festival will be held on the weekend of July 14-16, which is a couple of weeks earlier than normal, but does it also put Hillside into conflict with another of Guelph's summer festivals?


Typically, the second weekend in July is when Art on the Street happens in Downtown Guelph, which would put it into conflict with Hillside's new time and date, right? Not so fast says Marty Williams, executive director of the Downtown Guelph Business Association.

"We were aware and will be figuring out how to position ourselves so we don't conflict. You should know that Art on the Street changed the usual dates because there was a big show in Toronto that would have put some of our artists in conflict. We're flexible. We'll figure it out."

So there's no conflict in other words. Hillside, meanwhile, has more considerations that just a change of date to keep in mind before next year. “I think we are going to gave to look at different revenue streams and a different model,” Hillside executive director Marie Zimmerman told the Tribune.
Posted by Adam A. Donaldson at 3:30 PM