What Guelph Cases Are Currently Before the OMB? 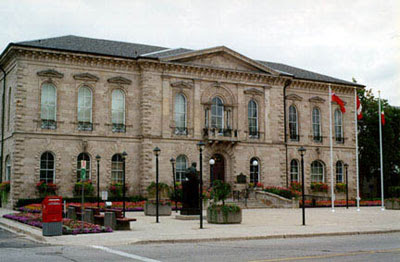 We hear a lot about the Ontario Municipal Board - the various cases they hear, the call for reform in some quarters of the province (including our own) - and there's no denying the influence they have in how our cities are shaped and who gets to do the shaping. But would you be surprised to learn that there are nearly a dozen open cases concerning the City of Guelph before the OMB? So where are they, and what are they about?


580 Paisley Road - On the corner of Paisley Rd and Silvercreek Pkwy N, the Armel Corporation was looking to install a gas bar, car wash and kiosk, but the owner of the property thought that the idea was a bit ambitious for such a small piece of land. The issue was first appealed way back in October 2008.
1159 Victoria Rd S - A zoning amendment looked to increase the number of units for a development near the Victoria East Golf Club. The developer was looking for "an overall increase in the number of residential dwelling units with reduced minimum lot areas and frontages, reduced minimum yards and increased maximum building coverage." No decision was made in time, and the matter went to appeal in November 2012. There was a hearing on the matter in April 2015.
Entire City of Guelph - This one has to do with the City's update to the official plan, which has to revived every five years as per provincial law. The final phase of the current update, Amendment No. 48, is to ensure that everything falls within provincial guidelines, and it was was approved with modifications by the Ministry of Municipal Affairs and Housing on December 11, 2013, however, an appeal was heard in October 2014. Since then, the OMB has held a number of hearings, but the last news was a settlement hearing last November with orders for further amendments.
Various Lands Within The City Of Guelph - Guelph has a plan for the old jail lands in the eastern end of the city, and it's called the Guelph Innovation District, but to make it happen, it needed a plan, the Guelph Innovation District Secondary Plan. It was approved by council in May 2014, and was almost immediately appealed by a number of parties. The last decision concerning the matter has made by the OMB in February 2015 when the Guelph Airpark Inc. was ordered to be part of the process. The Phase 1 hearing on the appeal was heard February 22, 2016.
171 Kortright Road West - Developers wanted to build an apartment building on land that was zoned as institutional – educational, spiritual and other services zone, so they needed a zoning change. The proposed building will be five storeys tall and have 81 units no bigger than two bedrooms, but 25 per cent of the units will be one-bedroom. The plan was approved by the City and endorsed by the OMB at a hearing this past May.
15 & 19 Wyndham Street North - Two downtown property management companies and two numbered companies filed an appeal about zoning changes made that will allow a proposed gaming cafe and the performance space for the Making Box to serving alcohol on the second floor of the building. The City granted a variance for the second floor facilities of the in-construction Petrie complex in October, and the OMB appeal was heard last month. No decision has yet been made.
360 Woolwich Street and 15 Mont Street - An application was filed to rezone the current property from R.1B (Single Detached Residential) and OR (Office-Residential) Zones to one specialized OR (Office-Residential) Zone. The idea was to allow for the development of eight more live/work apartment units at the rear of the current building. Staff recommended that the zoning change be approved at a council meeting last November, but the matter has yet to be heard by the OMB.
67 Arkell Road - The owners of the lot, Gopal Goel and Nasir Sajid, asked for a severance of the property to create another residential lot. Along with that, they asked for a variance to allow for a rear year with a depth of 1.5 metres versus the usual depth for a rear yard of seven metres. The case has already been heard by the OMB in April, but there's another hearing on this matter on July 11.
282 Victoria Rd N. and 475-485 Speedvale Ave E. - Imagine you had a business renting U-Hauls, but the commercial centre you're based in is not zoned to allow for a vehicle rental establishment. This is the crux of this appeal, as the land for Suncor Energy Products Partnership is zoned NC-1, which allows for a gas bar or automated car wash, but is not zoned for the renting of trailers and trucks. This matter will be heard by the OMB on July 12.
202 Glasgow Street North - A new case brought to the OMB, residents in the area are concerned that the owner of 202 Glasgow is tearing down the original mansion with the intention of using a loophole to turn the building into defacto student housing. The residents are arguing that the owner didn't give them enough notice to file protests with the City before the variances were approved. The appeal is being heard on August 9.
51 Vanier Drive - The application has to do with the property owner keeping a five square metre shed used to house pool supplies requiring a slight by-law variance. The matter will be heard at hearing on August 10.
Source: OMB website
Posted by Adam A. Donaldson at 6:00 PM