City Pushing to Eliminate the Last Lead Pipes in Guelph 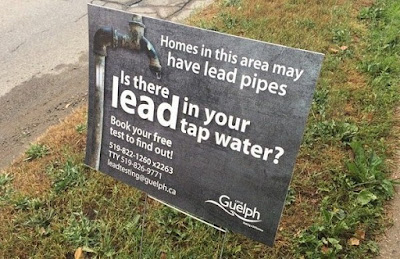 If you've seen these black signs pop up around your neighbourhood, it's no cause for concern, unless you've gotten a postcard-size version of it in your mailbox, in which case the City of Guelph wants to hear from you. The City of Guelph is targeting a few hundred houses that remain untested for lead pipes in the hopes of finally closing the book on that infrastructure misstep.
"We hope when people are out walking their dog they see the signs and clue in," said Abby Spielmacher of Water Services. The signs, she added, are being rotated through specific neighbourhoods on a two-week basis along with postcards, door knockers and phone calls to potentially affected households. If the multiple notifications (as many as 10) don't work, the black and white sign is meant to get their attention. "[People] should be startled because we want them to call in," Spielmacher said.
Lead contamination in drinking water has been a major news item this year due to the ongoing crisis in Flint, Michigan. Spielmacher explained that things are no where near as dire in Guelph because lead pipes weren't as permissive here, and since 2007, when the Province of Ontario established a corrosion control plan, about five thousand homes have been tested and only seven per cent had elevated lead levels from a lead service line.
Houses with lead pipes tend to be built on or before the 1950s, and it's those older neighbourhoods that the City is targeting. Houses built during the World War II are particularly vulnerable to having pipes with lead in them, and though the city website shows a rather large area of the city core being potentially affected by lead piping, Spielmacher says the list of potentially affected properties is actually rather small. "The City is specifically targeting homes where we suspect there may be lead pipes based on our records or age of the home. We have about 260 homes we would like to test," she explained. "We encourage anyone who is concerned or curious to call or email us to see if there home should be tested."
Still, the presence of lead pipes is not an immediate source of danger, though it is dangerous. As in Flint, the concern is when chemicals in the water cause the lead in the pipes to corrode, allowing lead to leech into the drinking water. The aforementioned corrosion control plan establishes guidelines to make sure that doesn't happen by assuring the chemistry of the water that runs through the pipes does not corrode the lead. According to the Ontario Ministry of the Environment and Climate Change, the acceptable maximum concentration of lead in water is 0.01 milligrams per litre.
Spielmacher said that Guelphites can be assured that there's no lead in the raw water, treated water or the distribution system that the Royal City's drinking water runs through. The lead pipes are confined to the ones run from the water main in the street across City property and then across private property, and about 150 of the houses left to be tested are on private property where the lead pipes will have to be replaced at the expense of the owner. The rest of the lead pipes are on public property, and will be replaced in due course by the City.
If you've received a notice, or are curious about lead pipes in your home, testing for lead only takes about 10 minutes and merely requires a water sample for your tap. Once the house has been cleared of lead, the owner is given a letter and the house is taken off the City's list. If you do have lead pipes though, the City offers assistance. "The Grant Program offers homeowners up to $1,700 to replace a privately owned lead service line. This is to cover labour, materials, excavation and permits," said Spielmacher. "The typical replacement costs (including HST) run from $1,000 to $4,000 with the average cost at $2,000. You must be approved for the Grant program (confirmed lead) prior to replacing a lead service line."
If you're worried about your home having lead pipes, you can get in tough with Water Services at 519-822-1260 x 2263 or email leadtesting@guelph.ca.
Posted by Adam A. Donaldson at 9:00 AM