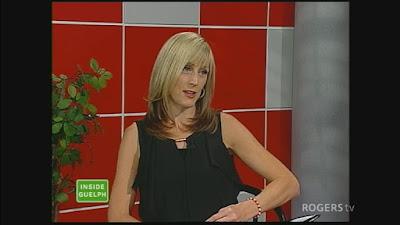 What's going on with Guelph's Rogers Channel? That's a question I started asking myself yesterday when I found a tweet from Inside Guelph, a talk show that airs weekdays on Rogers Cable 20. Or rather it did. The mysterious tweet, which has since been deleted, implied that not only was the Royal City's local human interest show been cancelled, but that the entire Rogers community access operation was closing.
This is the offending, now deleted, tweet.

It was in response to a query from the Rainbow Chorus Twitter feed asking when a segment featuring themselves would make it to air. 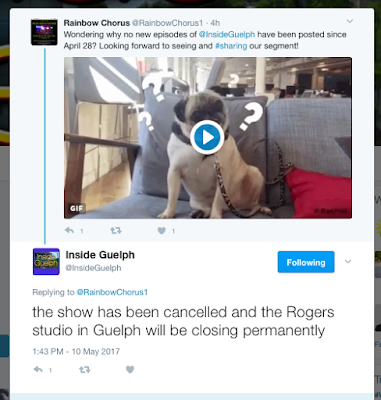 After a thorough search of the Rogers TV website and it's social media feeds, no follow-up mention to the cancellation of Inside Guelph, or the closure of the Rogers Studio at 130 Silvercreek Pkwy N. could be found. In fact, it seems like business as usual. I reached out to a producer I know at Rogers when I found the tweet yesterday afternoon, and Jan Hamilton told me in an email that the "misinformation is getting out there," and that "Rogers TV isn’t going anywhere."
Inside Guelph may be another matter though. The only other mention of the cancellation of Inside Guelph I could find was a Facebook post from an acquaintance who is a make-up artist that used to appear on Inside Guelph. Her personal account is private so I won't quote her by name, but in the post she said, "I'm so sad to share the loss of Rogers TV Community programming, effective May 1."
Indeed, Inside Guelph is no longer on the Rogers schedule, and has been replaced with a rotating selection of different shows. However, as of the writing of this article, both the Inside Guelph page on the Rogers website, and the Inside Guelph Twitter feed were both functional, but the last video posted to the website was on Friday April 28, and the last tweet was sent out on May 2.

Hamilton referred me to supervising producer Jeremy Cook for questions about Inside Guelph, but I was unable to get a response from him by phone or email.
As to the fate of other shows, that is also in question. Programs like Talk Local and #GuelphLife are still listed on the "Shows" page of the Rogers website, and are still posted to the schedule, but the newest video for those shows are dated May 2 and April 27 respectively. Rogers broadcast of city council meetings seems uninterrupted with the video of the last meeting on May 8 presently available.
So what's the deal? Why might have Rogers suddenly pulled the plug on our locally produced television channel? Blame the Canadian Radio-television and Telecommunications Commission (CRTC) who last June approved new rules that would see $90 million that media companies are supposed to spend on community access channels like Rogers 20, transferred instead to private broadcasters like CityTV Toronto or CTV Kitchener.
The justification for the move was that the big media companies need wiggle room to save local news; ad revenue is way down for local stations, which means they have to work with less and less in terms of financial resources. To wit, look at Bell Media's decision to cut sports coverage at the CTV Kitchener and London stations in March, a move that negatively affects school and amateur teams for whom the local news is their only exposure.
Now, on the other end, it seems that the big media companies are taking away another venue for local stories, even though these community access stations have proved themselves quite cost effective  (although granted its because of its mostly volunteer production force). Still, it costs private stations $6,000 per hour to produce the news versus $500 per hour for community access. And while broadcasters have been losing ad revenue, the CRTC has been chopping away at mandated funding for community access from 10 per cent of revenues in the 70s and 80s to two per cent by 1997 and now the 0.5 per cent that will go into effect on September 1.
So what's going at Rogers Channel 20? It's uncertain, but it doesn't look good.
Posted by Adam A. Donaldson at 3:37 PM