Niki Ashton Promotes Pride for Being Left in Guelph 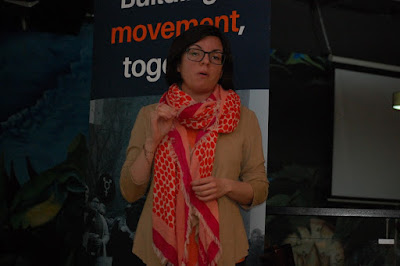 Niki Ashton came to Guelph Sunday evening. The Churchill—Keewatinook Aski became the latest NDP Member of Parliament to pass through Guelph lately, and the second NDP leadership candidate to visit the Royal City in the last couple of weeks. Ashton's message Sunday evening at the Red Papaya in Old Quebec Street was that the best way forward for the national New Democrats was to be themselves.
About 30 people gathered to hear Ashton talk about her campaign to become NDP leader, and how she'll carry on her fight into the next federal election. Ashton's is advocating for a return to the left, and traditional progressive and socialist values after the party "played it safe" by trying to appear more centrist under Thomas Mulcair.
Ashton accused the Liberals and Justin Trudeau of flanking the NDP on the left in 2015, only to enact policies that betray those promises since taking office. "Our goal going forward has to be one of political change and that neither the Conservatives nor the Liberals are on the side of working people in this country," she said. "We have to stand strong, and we have to stay strong for the people we represent."
The campaign hopes to promote environmental, social, and economic justice for all as a way of appealing to millennials, of which Ashton counts herself as a member. Precarious contract work, high student debt and an overheated/overpriced housing market are all targets of Ashton's platform. Inequality is becoming inter-generational for the first time, she said, people no longer have an expectation that they will do better than their parents before them.
To help combat that, a new economic justice reform policy package is coming from the national NDP tomorrow in a Bay Street announcement "I think its incumbent on the NDP to put forward a vision that speaks in very real terms to what we’re going to do," Ashton said adding that higher corporate taxes and an expansion of the social safety net will be among the proposed measures. "We also need to come up with bold ideas that speak to the economic hardships that people are facing, like free tuition," she added. "It’s not a choice anymore, people have to go to school."
Ashton added that it was important to not let Canada's older population to fall behind either. "Seniors' poverty is a major issue in our country, and it really sheds a light on the way the middle class in our country is eroding," Ashton explained. "The services are not there, neoliberalism is leaving people to fend for themselves in one sense or another, and all the while they’re making corporations wealthy."
As to the most important question: why local NDP members should vote for Ashton, she noted her pride at being part of the progressive movement and how quickly she was able to energize the base and get signatures for her leadership bid. "This is a party for all us and there’s too much at stake for this to not be a party for everyone," she said. "The time is now, that’s why I'm running, and I like the ideas we’ve put forward and the energy we’re generating."
And if Ashton doesn't win, she's fine working with one of her other colleagues. "I am thrilled to be in a race with colleagues I respect a great deal and stand on the front lines with in our fight in Parliament," she said. "I think we all share a deep commitment and I'm excited to go forward with them."
You'll be able to hear my interview with Niki Ashton on this Thursday's Open Sources Guelph on CFRU 93.3 fm at 5 pm. In the meantime, the raw audio from Ashton's speech tonight is below.