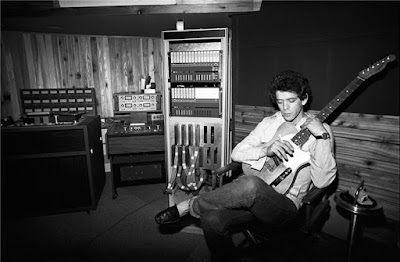 Normally, the distribution of the student bus pass is not controversial for the University of Guelph's Central Student Association, but then they did the unthinkable by including a top hit from 1972 in their music playlist while handing out the stickers to summer students. A walk on the wild side, indeed.

While handing out bus passes in the University Centre courtyard on Thursday May 11, the CSA did commit the crime of playing the Lou Reed song "Walk on the Wild Side." The lyrics, which include a story about "Holly" who transforms herself from a man to a woman while traveling with the song's narrator, were accused of being transphobic by someone or someones. The CSA issued a florid apology on Facebook, which has since been deleted, but because the internet is forever... 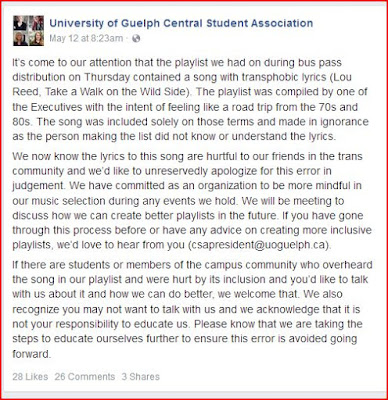 That's when the story takes off, for the UK Guardian took notice and asked Reed's former collaborators for comment. “I don’t know if Lou would be cracking up about this or crying because it’s just too stupid,” said Hal Willner, Reed's producer. “The song was a love song to all the people he knew and to New York City by a man who supported the community and the city his whole life.”
Unfortunately for the CSA, another media site took notice and it was The Blaze, the right-wing news site founded by Glenn Beck and home to instigators like Tomi Lahren who love stories about liberal "snowflakes" and social justice warriors overreaching. (Actually, The Blaze got it from MRC-TV, an "online media platform designed to broadcast conservative values, culture, politics, liberal media bias, and entertainment to a new and diverse audience on a social media optimized site.") "Apologize for being born snowflakes you offend me," read one of the comments to the surprisingly even-handed article. "Wonder why no colleges are concerned about all the anti-christian music? Hmmm……" read another.
While this might seem like another silly story about the over-protectiveness of the politically correct, it might do us all some good to remember that the opinion of one or two people does not make a consensus. Consider Buck Angel, an adult film star and producer turned activist and educator. He's a trans man, and had this to say.

Wtf! This song is not #transphobic! Try listening to it and try understanding the time from which is came from. Also maybe you #students should study why and where this song was written and the history behind it. How it actually brought attention to being a transgender person. That #mrreed wrote this with no intention of #hate only #love as he happened to support us! People please stop trying to rewrite our #transhistory just because you think it's transphobic. Not everything is #transphobic just because you think it is! Please add your comments as I love a great discussion. #love #tranpa
A post shared by Buck Angel (@buckangel) on May 21, 2017 at 10:39am PDT