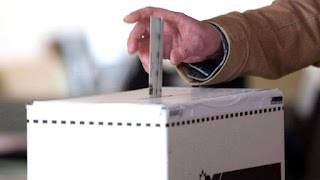 It was a little over six months ago that I sat down with Steve Dyck and Ken MacKay of Fair Vote Canada's Guelph branch to talk about electoral reform, it's various options, and what form it might take when the Trudeau government came back with its options this past December. Those were the days.


There's been a lot of noise around the electoral reform portfolio over the last month or so, but not much movement. The promised reform seems even further away now with the Liberals issuing a minority report to the committee they organized on the matter, a much derided online survey that seems to accomplish nothing, and now, the Minister of Democratic Institutions that supervised it all, Maryam Monsef, has been shuffled off to the greener pastures as the Minister of Status of Women.
That did not go as hoped.
So in considering all that, I thought the time was right to get some Fair Vote people together again to look at the "progress" made on their favourite issue in the last six months. MacKay couldn't join us, but Dyck and his son Nathan, who's been working on the youth end of supporting electoral reform, could, and we discussed the process, the public statements, and the chances that electoral reform might still become a thing passed by the House of Commons. Surprisingly, there is still optimism on the matter.
Of course given the givens, this is an optimism tempered by a degree of cynicism. We called it "electoral dysfunction," where there's widespread agreement that a change has to be made, but we're getting bogged down in the specifics. Can we all agree on what reform looks like? Were the Liberals being too ambitious in getting this done before 2019? Are Fair Vote supporters putting too much faith in the power of proportional representation to cure what ails us politically? We talk about all that, and more, on this week's Guelph Politicast! (The first of 2017 by the way.)