Committee of the Whole Preview - What's on the Agenda for the January 16 Meeting? 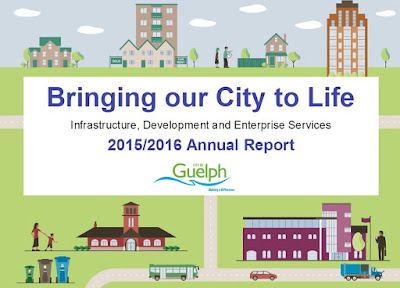 It's back to business as the Committee-of-the-Whole meets for its January confab with issues ranging from a staff presentation on infrastructure to sign bylaw variances, and an update on District Energy.
Presentation of the Canadian Brownfield Network Awards - Reprogram (City of Guelph) and Renew (Fusion Homes) Grant Walsom, Partner, XCG Consultants Limited
Infrastructure, Development and Enterprise Annual Report Presentation - How's it going over there in Engineering & Capital Infrastructure Services; Planning, Urban Design & Building Services; Business Development & Enterprise; Facilities Management; and, Environmental Services?
Well, Phase 1 lands are over 50 per cent sold out in the Hanlon Creek Business Park, and there was an increase in investment downtown in 2015. Approximately $500 million in building permits were issues in 2015, and there were over 125 development applications processed including site plans, Zoning By-law and Official Plan amendments and plans of subdivision. The Canadian Federation of Independent Business in 2016 listed Guelph as the fourth best city to start a business. Guelph had a waste diversion rate of 63 per cent in 2015, as 9,700 tonnes of organic waste was turned into compost, while energy efficiencies to the transit garage on Municipal St and the Sleeman Centre saved $85,000 per year.
There are some challenges though obviously. We've got Places to Grow breathing down our necks, we're the biggest city in North America to be wholly reliant on ground water, and we don't have a landfill for community waste disposal. Infrastructure is another red flag as the City races to begin costly improvements to our roads and buildings, but work is proceeding. The train station renovations are on-time and on budget, and over three kilometres of sewer pipe and water pipe have been replaced along the York Trunk Sewer and Paisley-Clythe Feeder Main.
Still, the City's reducing operating costs, improving waste diversion, and our residents use less water per person than most communities in Ontario.
COW-IDE-2017.1 Heritage Review (Removal) of 300 Water Street and 129 Surrey Street East from the Municipal Register of Cultural Heritage Properties - Back in May 2009, both properties were included as non-designated on the Municipal Register of Cultural Heritage Properties in a blitz of additions from the Burcher-Stokes Inventory. Now, not so much. Not only was 300 Water not built in the 1890s like the register says, and not only does Heritage Guelph see no historical value in the house, but Fire Services has ordered the vacant building be demolished for public safety. As for 129 Surrey, it's a small house that also doesn't seem to have any Heritage value, and someone else wants to build another house there so...
COW-IDE-2017.2 Cart Capital Funding Source - When the budget to buy carts for the new automated waste collection system was completed in 2012, there was about $500,000 left over. The remaining money was put aside for a capital project for the conversion of any leftover sites to the new bin collection, but only about $100,000 was spent and the project was closed in 2015. The remaining money went to the Traffic Signal System project, where it's sat for the last year, but staff is asking that money now go to a capital project from 2016 that was not included as part of the 2016 capital budget.
COW-IDE-2017.3 Sign By-law Variances for 33 Cork Street West - Central Guelph Dentistry is looking to put a new sign at twice the normal height typically allowed in the area. Staff has given there approval because there's not a lot of wiggle room from placement on the property and the original sign was actually supposed to be bigger until the proposal was amended.
COW-IDE-2017.4 Sign By-law Variances for 370-374 Stone Road West - The McDonalds opposite Stone Road Mall has to enact a new corporate mandate to speed up times at the drive-thru, and that requires two new menu displays that are 4.6 metres-squared each and nearly two-and-a-half metres tall. The City will allow for the variance.
COW-IDE-2017.5 Sign By-law Variances for 500-530 Willow Road - Westwood Plaza is changing up their signage. Two other signs on the site installed by the previous owner were done without a permit and in violation of sightline regulations.
COW-IDE-2017.6 Mayor’s Motion, Norfolk Street Bridge - Mayor Cam Guthrie is bringing forward a motion to direct staff to include some kind of commemoration for Guelph veterans as part of the reconstruction of the Norfolk Street pedestrian bridge. The meeting package consists of 23 correspondences from Guelphites, all of which are in favour.
COW-IDE-2017.7 District Energy Update - Following up on council's previous efforts to get a hold of the fiscal situation with District Energy, this report offers on update on two key areas: the Hanlon Creek Business Park and the Downtown District Energy Nodes. Staff have amended the agreement between the Independent Electricity System Operator (IESO) and Envida to terminate the contractual obligations and return their security deposit, while the City has amended its own agreement with Envida to reduce the land requirements and settle outstanding payments to the City. The new agreement between IESO and Envida avoids about $60 million in loses and recoups $612,000 for the deposits.
Posted by Adam A. Donaldson at 3:41 PM