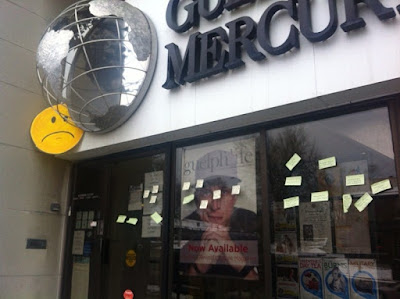 It was one year ago today that the news broke that the Guelph Mercury was shutting down. Under different circumstances, this year would be a cause for celebration for the Merc, it's 150th birthday, but instead, despite the honest efforts of several people in the community, the hole left behind by the paper's closure still hasn't been filled. So is there a better time to look back?


On this week's edition of the Guelph Politicast, we hear from Phil Andrews. Andrews was the managing editor of the Guelph Mercury for its last decade of publication. It was not the position Andrews wanted to be in, but it's the one he found himself in when he was told the Friday before the public announcement that the Mercury would be closing after nearly a century-and-a-half in publication. The rest, as they say, is history. But it seemed appropriate one year later to put history on tape (so to speak).
There have a lot of questions since the closure of the Mercury, a lot of "What if...?" scenarios about what Metroland might have done as opposed to closing the paper, or what Metroland's calculation was when they decided that it wasn't in their business interest to keep the Mercury open anymore. Andrews talks about some of that, not to mention what he thinks Guelph lost in the paper's closure, what he might have like to have seen done with the Mercury instead, and how he's coping in his new life as a communications professional with the Government of Ontario.
Oh Guelph Mercury, how we miss you is the topic of this week's Guelph Politicast.


Following up on something Andrews said in the podcast, Vocamus Press announced Monday that they're working with Andrews and fellow Merc alums on releasing Guelph Mercury Rising sometime later this year, with some of the proceeds going to Action Read Community Literacy Centre. You can order an advanced copy now at info@vocamus.net.
The theme music for the Guelph Politicast is from the KPM Klassics collection by Syd Dale.
The host for the Guelph Politicast is Podbean. Find more episodes of the Politicast here.
Remember that the Politicast Podbean channel is also the host for podcast versions of Open Sources Guelph. The previous Thursday's episode of Open Sources will be posted on Mondays.
Posted by Adam A. Donaldson at 12:26 PM