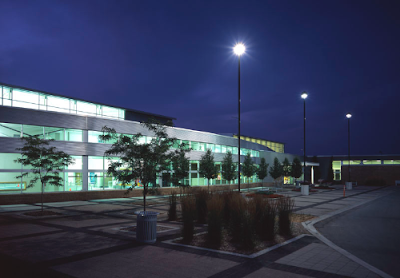 If you've been on the bus going through the West End Rec Centre loop lately, or are maybe just an eagle-eyed traffic water in the neighbourhood, you might have seen that there's a lot of people just not obeying the posted rules for parking and one-way access there. If it ticks you off to see people park in a loading zone, or head in the opposite direction of the one-way, you're not alone, but sadly there's not much Rec Centre staff can do about it.


"Parking's been the number one complaint since we've opened the doors," said Vikki Dupuis, the City of Guelph's Program Manager Recreation Facilities Operations. Despite signs through the loop indicating that it's a fire route, one way and no parking, "It's an ongoing battle," she said.
"There's a level of frustration," Dupuis added saying that while the West Rec Centre has 400 parking spaces, "everybody fights for those 98 parking spaces in the front."
According to Dupuis, the parking issues at the Rec Centre are really design issues. Three-quarters of the Centre's available parking is around the back, and the only access is off Imperial Rd. S. requiring one to drive past the front of the centre and around to the back of the building. It's a flaw that Dupuis said was brought to the attention of the architects in the beginning, which might eventually be resolved if an entrance at Elmira Rd. is ever constructed.
If you think there's a solution that the management of the Rec Centre hasn't considered though, you're wrong. Meters in the front lot, permit parking, it's all been done or dismissed. They even got a mobile sign and hired a company to post someone to direct traffic for an added personal touch, but after a week, the company asked the Centre not to hire them back as the attendants were being verbally abused. Staff know that feeling too. When confronted by an unruly person they make the point that when you go to Stone Road Mall, you sometimes have to park near Sears even if you're going to the food court, but there's a common refrain to that simple point of logic, "They say, 'My taxes didn't build Stone Road Mall,'" Dupuis said.
For the Rec Centre, the priority is keeping people out of the spot where the Zamboni from the rink dumps the excess snow, and to keep people clear of the fire route. But even though they have all the singing in place, the West End Rec Centre hosts a lot of out-of-town visitors in the evenings and weekends, meaning that special arrangements have to made with by-law in order for more enforcement to happen during those times.
"Parking is a personal thing with people," Dupuis laments. "They park where they want to park, really because they think there's no consequence."
Posted by Adam A. Donaldson at 6:10 PM

This is a typical city employee response. Blame the architect. Who signed off on the plans? Who authorized the construction. Wasn't it someone in the office of the CAO. If the fault was pointed out, why was construction allowed to proceed?