Mercury Debate Stays Civil, Has a Few Laughs, But No Blows 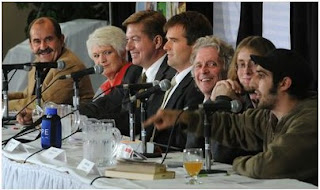 The crowd that gathered at the Italian Canadian Club to hear the all-candidates debate between the seven candidates running for MPP of Guelph were treated to hearty and occasionally frank discussion about the issues affecting the people of Guelph. Those of us who watched online, were irked by pop-ups and obnoxiously loud ads.
Still, despite those petty annoyances, there was a lot to appreciate about the night's events. First of all, the Mercury opened the door to all candidates, giving so-called fringe candidates a platform they don't usually enjoy: a major debate. Second, all the candidates came and were ready to have an honest exchange, and nary a spec of mud was slung.
Despite the format and the number of candidates, a lot of ground was covered during the nearly hour and half debate. Here's a breakdown of my thoughts on the debate per candidate:
Philip Bender (Libertarian) - It takes a lot of guts to be one of the two guys to slant right, but it takes even more to be one guy to advocate less government intervention when all the questioners seemed to be inquiring about more. Bender stayed mostly ideological in the debate, not really referring back to Guelph as to how his policies and ideas might affect our city, but even if he did, I don't think it would have mattered much. A lot of people asked questions about transit, help for students, and concerns about healthcare, and Bender's message that the market will out, in the face of those voter concerns, seemed rather hollow.
Liz Sandals (Liberal) - As the incumbent, Sandals took the most hits, but as a wise man once said, it's not how many hits you take, but whether or not you're still standing by the end. By this standard, Sandals rose to the occasion and in the process managed to stay above attacking other parties and driving home the Liberal platform for the future as well as past accomplishments. And despite the discussion about Guelphites feeling like they're not being heard, a percentage of people watching online seemed as if they were hearing Sandals, with many of the insta-polls giving her the edge.
Greg Schirk (PC) - Like Bender, Schirk was the face for the ideological right (albeit centre-right), however unlike Bender, he put a Guelph-minded face on the issues and came across as personable and invested in the Royal City. Schirk's goal for the night was to portray a feasible alternative to Sandals, and to downplay notions, in particular from some further down at the table, that a PC vote isn't a vote for the boogie man. I think he was a success on both counts, and even people online who I know wouldn't vote PC in a million years agree that Schirk seems like a good man, and a good candidate. He also stayed above a lot of personal attacks, and admitted that he didn't like his own party's TV attack ads.
Steve Dyck (Green) - If one person shattered expectations last night, I think it was Steve Dyck. The Green Party candidate came out swinging - hard - and pushed against all the other major party candidates. (If you've listened to the Dyck Politicast, you know that he doesn't even give the NDP benefit of the doubt.) By far, Dyck's biggest strike of the night was on the question of MPP availability, which Dyck accused Sandals of being unavailable when trying to propose a solar energy project for a downtown church, seemingly knocking Sandals off her perch for a brief moment. In all, I think Dyck single-handedly dispelled the popular appearance of the hippie-dippy Green nominee into something that means business. The coup de grâce: "I claim those 1,000 [Green] jobs [created in Ontario] for the Green Party."
James Gordon (NDP) - Sticking to form, Gordon was calm and cool, and seemed content to present the NDP platform without trying to make too much hay at the expense of the other candidates. When the opportunity presented itself, he did pile on the "Liz doesn't listen" express, if only to help promote his own efforts to take the conversation directly to the people of Guelph with the past summer's "Listening Tour."
Drew Garvie (Communist) - Garvie held his own, and along with one other candidate got the best lines of the night. With four campaigns in four years, of course Garvie was arguably the most experienced candidate on stage, and was able to land some pretty compelling blows on the other candidates, and for the his policy on issues.
Julian Ichim (Independent) - Ichim began with a bold statement: "I've caused enough trouble outside of Parliament, imagine what I can do inside." He then expounded on the need to recall elected officials if they fail to meet up to the expectations of their constituents and how the poor have limited access to the system and are often disregarded for the interests of wealthy individuals and corporations. For Ichim, I think the strategy was to sell the contrary point of view, and to make people try and think twice about what's important to them. Of course, Ichim had his somewhat nefarious reputation to combat as well, but I think his message was received.
Posted by Adam A. Donaldson at 10:23 PM