Greg Schirk campaigner Allan Boynton sent this photo along shortly after the Premier's visit to Guelph this afternoon. It's the McGuinty campaign bus sitting parked along Carden Street in front of a "Wrong Way" sign, which I suppose for the partisan is good for a laugh. It's completely out of context, and I don't know why the campaign bus was stopped there. Perhaps McGuinty was hankering for some sushi, or perhaps he wanted to stop be the Cornerstone and do a cafe tour of Guelph, or maybe something caught his attention in the window at Dis-a-Ray. Of course the notion of Dalton McGuinty doing a pop-in at Ray Mitchell's store offers plenty of comedic material in and of itself, but I digress. Here's the photo: 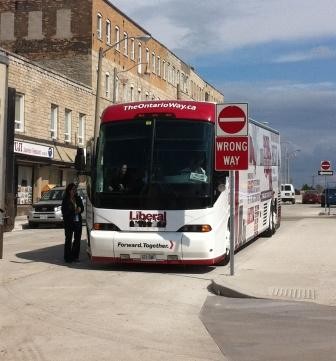 Lookin' for the Dalton Highway? But I really think that it is Boynton who should be taking the high road, too many cute stunts like this and mis-use of Twitter etc. smacks of juvenility and can hurt their cause. It is quite possible that the local cons lost the last Fed. election because they too had a dick for a campaign manager. Schirck might be better off on his own.

Lookin' for the Dalton Highway? But it is perhaps Boynton who should be looking for the high road, too many cute stunts like this and ignorant comments on Twitter can cost the candidate a win, look what happened federally when the local cons picked another dick for a manger. Schirck would be better on his own.