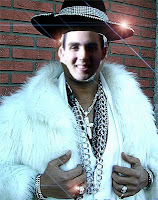 It's a rare day indeed when Michael Sona, communications director of the Marty Burke campaign, reaches out to the media. As I was trolling those series of tubes (Bush slang for internet) this morning, I came across a post on the Mercury's Guelph Votes blog about a press release sent to the Mercury offices about a luncheon between Burke and former Ontario Premier Bill Davis on Wednesday. The release has all the usual details, and at the end there's this line: "Marty and Mr. Davis will be available for questions following the event. If media wish to be present for the entire event including the lunch, they must pay the registration fee, and are eligible for a $65 tax receipt."
As the bolg points out, there's initally some confusion on this point. Typically, if you want the media to come to something, they get covered, as in they do not pay the cover charge. Scott Tracy, the reporter who posted the blog, wrote that he sent an e-mail (naturally) for clarificiation. You can read it for yourself, but basically, Sona said that asking a question or two was free, however you have to be at the lunch, and getting in costs $100 and registering in advanced at the venue Cutten Fields.
Once again, Michael Sona has proven that he doesn't know how the media-candidate relationship works, which wouldn't be a problem IF HE WASN'T THE COMMUNICATIONS DIRECTOR OF THE MARTY BURKE CAMPAIGN!!! Glad I got that out of my system. But really, is he serious? He really wants to make media donate to the Burke campaign, while getting free coverage, and continue dodging most requests for media questions and interviews at the same time? I guess I had Michael Sona wrong, he likes the media just fine, as long as it's pay-per-view. Congratulations Michael, I think you've finally out-Roved Karl Rove. Somewhere, a wolf howls in your honour.
Posted by Adam A. Donaldson at 12:37 PM