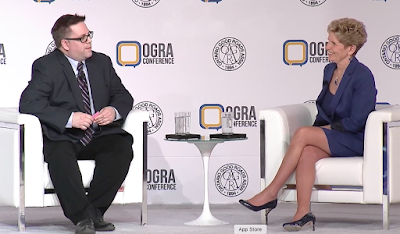 It was a major conference of municipal leaders, influencers, and business people. Appearing live on stage where politicians from the three major parties, including the interim leader of the Official Opposition, and the Premier of Ontario. Only one person could interview them on the issues that matter, and get straight answers, and somehow, that person was me.

Back in February, I was invited to take part in the annual conference of the Ontario Good Roads Association and interview Premier Kathleen Wynne, interim leader Vic Fedeli, and Niagara Falls MPP Wayne Gates in front of between 1,000 to 2,000 delegates. The setting was the conference floor of the Fairmont Royal York hotel, and the possibility was mind boggling. To say this was the biggest thing I've even done as a political journalist is something of an understatement.
These were interesting times just three months ago. Fedeli was embroiled in the immediate fallout of Patrick Brown's resignation and the beginning of a contentious leadership race. Gates was speaking on behalf of a party that many thought had no shot at forming a government. Wynne had to convince a cynical electorate that the Liberals were worth the investment of four more years in government. A lot can change in 90 days. Well, for two out of three anyway.
So let's get to the OGRA Sessions on this week's expanded edition of the Guelph Politicast!


You can learn more about the Ontario Good Roads Association by visiting their website here. Remember that if you haven't voted yet in advanced polls, Election Day is June 7, and the polls are open 9 am to 9 pm. If you have yet to receive your voter information card, you can learn where and how to vote at the Elections Ontario website.
The theme music for the Guelph Politicast is from the KPM Klassics collection by Syd Dale.
The host for the Guelph Politicast is Podbean. Find more episodes of the Politicast here.
Remember that the Politicast Podbean channel is also the host for podcast versions of Open Sources Guelph. The previous Thursday's episode of Open Sources will be posted on Mondays.
Posted by Adam A. Donaldson at 9:00 AM