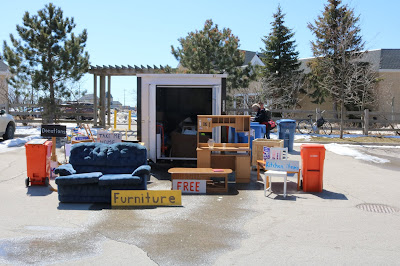 On an episode of the Guelph Politicast back in April, filmmaker Kalev Jaason talked about his documentary Diverted, and his attempt to prevent large quantities of reusable items left on the curb by students leaving town from ending up in the landfill. His efforts have not been in vein, as 25 different local organizations have become the beneficiaries of the diversion tactics of Jaason and a team of volunteers.


For two weeks in April, Jaason and nearly three dozen others, organized, sorted, and transported items that might have ordinarily made their way to a landfill in the back of a garbage truck. Instead, tonnes of food, furniture, clothing and other household items have been given a new life.
"It exceeded my expectations and I think it exceeded everyone's expectations," said Jaason in an email.
"The goal was to have as broad of an impact as possible in the community," he explained. "The items that were donated and collected ended up being distributed to 25 different groups, organizations, and charities in Guelph, as well as international students and members of the community who picked up a lot of the furniture." 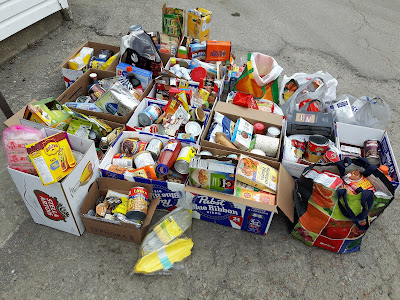 That's about 350 to 400 pieces of furniture saved from tables, to chairs, to desks, to shelving units, to beds. According to Jaason, many of those pieces were given away for free to new homes via an ad on Kijiji, while the rest was donated to Move Out Madness at the University of Guelph, Habitat for Humanity, and the Missions Thrift Store.
Hope House and the Drop In Centre were two other big recipients of the reclamation efforts receiving clothing, shoes, bedding and towels from about 150 garbage bags full of the stuff. Goodwill, Salvation Army, and St Vincent de Paul also shared some of that bounty.
Speaking of bounty, Jaason said that over 1,000 pounds of food was collected, and it went to nine different city agencies and groups including the Guelph Food Bank, the CSA Food Bank, Chalmers, Onward Willow, and the Guelph Community Health Centre. Also, sixteen 100 L green bins were filled and delivered to a local organic farm for compost.
In order to sort it all, Jaason had the help of about 31 volunteers over a two week period. He also credits assistance from Guelph businesses, who eagerly took part in his diversion efforts. "Pretty much everyone said 'yes' to whatever we needed to make this happen," he said.
Assistance came in the form of borrowed equipment like dollies, shopping carts, cardboard boxes and 15 large wooden shipping crates. "We even got a storage space given to us by [Guelph SelfStorage Co] on Elizabeth St," he added. "Our 10x10 storage locker has some mattresses, couches, and chairs, which are going to be given to students in the fall by Move In Madness as part of their program." 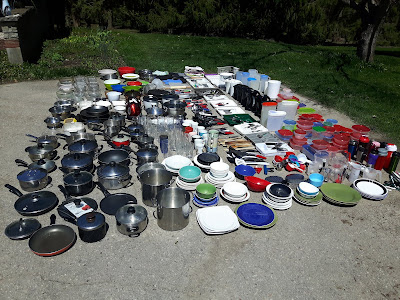 Jaason said that the program was not without its hiccups, but he was pleased with the response from the students that live along Chancellors Way and, in his estimation, about 60 per cent of them took part.
"I think we diverted around 95 per cent of the usable items from the students and put them back into the community, and to the people who need them the most instead of ending up in the landfill," he said. "Most of what ended up being sent to landfill was basically garbage or not in usable condition."
With success achieved on this year's pilot project, Jaason will hand over the reins to his volunteer co-ordinator Hanna Caruso and the U of G Sustainability Office with the idea that this will now be a regular thing every April.
"The plan for next year is to do this again - with some changes/improvements, more volunteers, and hopefully a lot more student involvement," said Jaason. "I think it is safe to say that Chancellors Way move out will never quite be the same again." 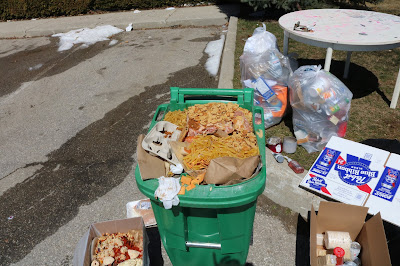