Monday Morning Massacre at the MRF 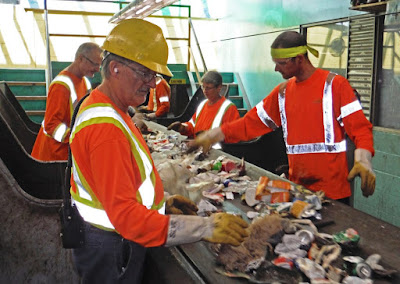 A lot of people showed up for work at the Materials Recovery Facility (MRF) this morning, and found out that they may not have a job there for too much longer. In all, 18 employees of the MRF will no longer be working there as the City of Guelph tries to streamline the operation in advanced of the completed service review coming back to council.


The news was released in a press notice this morning. "The City appreciates the hard work that all the folks at Solid Waste Resources do to make our operations run smoothly and better our residents’ quality of life," said Deputy Chief Administrative Office Scott Stewart in the release.
"Through our business service review we’ve discovered that we’re trying to process almost double the amount of recyclables at our materials recovery facility as other comparable facilities," he added. "This is resulting in financial losses."
The interim report of the service review last fall noted that the cost of operating the MRF is $4.86 million, while the revenue generated is only $2.75 million, which leaves the City to cover the $2.11 million difference.
Part of the problem, the report noted, was that Guelph's processing costs are, on average, $93 per tonne versus less than a $1 per tonne in the other municipalities the review looked at. Of course, Guelph doesn't just process its own recyclables, it's currently under contract with Simcoe County to process their waste material too, an agreement that concludes in June.
"In order to be efficient and improve our process for recapturing items that we can sell back to the market, we need to make changes, and that includes getting out of the business of processing recyclables for other communities," said Stewart.
As for staffing, it was a concern of the union representing MRF workers, CUPE Local 241, that jobs with the City were going to be privatized. According to the City of Guelph's statement, the union was consulted before the announcement was made, and the 18 people laid off at the MRF, which current staffs 50, will be found other work in the corporation where possible.
"Our goal, however, is to make these changes with as little impact on our people as possible, and we’re very disheartened to have to make these layoffs," added Stewart.
The full service review was supposed to come back to council last November, but it was delayed. The report was expected to be brought back to council this month, but it will instead be discussed at a special meeting of council on April 16.
According to General Manager of Environmental Services Peter Busatto in Guelph Today, the job cuts at the MRF are expected to save $750,000 per year.
Posted by Adam A. Donaldson at 5:35 PM