How Did Guelph PCs Vote for the Leader? 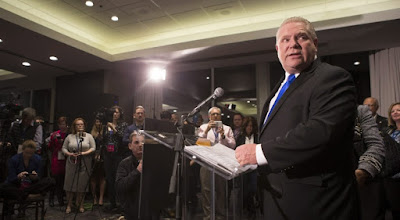 Doug Ford is the leader of the Progressive Conservative Party of Ontario. No matter how you feel about that development, it happened, and now the starting line-up for 2018 Provincial Election is set. But before moving on, let's take another look back. How did Guelph members of the PC Party vote in their highly contentious leadership campaign?
The Ontario PCs have released the riding-by-riding breakdown of how members of the party voted in each of the three rounds.

In the first ballot, out of the 418 ballots cast by Guelph PCs, Christine Elliott came out ahead with 161 votes, while eventual winner Doug Ford finished second with 113. Caroline Mulroney came in third with 76 votes, which was just 8 votes ahead of fourth place finisher Tanya Granic Allen.
Ford pulled ahead of Elliott in the second ballot 169 to 164, which played out in Guelph the province-wide trend where the majority of people who chose Allen first made Ford their second choice. Mulroney finished the second round a distant third with 58 votes.
On the third and defining vote, again reflecting the provincial trends, Elliott finished in first place with 220 votes to Ford's 183.
“I’m not disappointed Doug won. I’m a party guy. It sounds old fashioned, but I am. We all work together to make it better for the people of Guelph," said Bob Coole, president of the Guelph PC riding association to Guelph Today. “I have to work with him. My main concern is doing the best that I can do for the local riding. That’s my main concern: that we get what we need in Guelph.
Guelph is one of 20 ridings in Ontario that is still without a PC candidate although veterinarian Pat Meyers and real estate consultant Ray Ferraro are confirmed to be in the running. Green Party leader Mike Schreiner, and Liberal candidate Sly Castaldi have already been acclaimed by their party's riding associations.
The Ontario Provincial Election is June 7.
Posted by Adam A. Donaldson at 11:00 AM