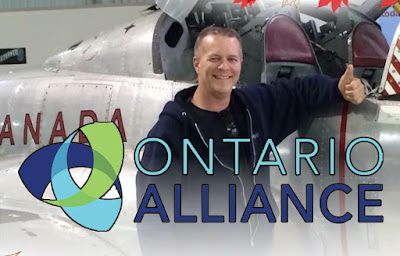 Famously last summer, Thomas Mooney decided that he couldn't run for the local candidacy of the Progressive Conservative Party due to the old leadership of Patrick Brown. It turns out, even under new leadership, he doesn't want to be the face of the PCs in Guelph and has instead found a new party to run for. Quite literally.

It’s official #Guelph! @ON_ThomasMooney is the @OntarioAlliance candidate for the riding of Guelph. Now it’s time to get down to business. The business of giving the voice back to the people. #OAP2018 #ONpoli pic.twitter.com/Q0P7Cmf0qo
— Thomas Mooney 🇨🇦 (@ON_ThomasMooney) March 27, 2018

Mooney, a road safety advocate by trade, stepped down from running for the PC nomination last August because of "unsettling occurrences" in various riding nomination contests. Following the ouster of Brown in the wake of sexual assault and harassment allegations, two nominations in Scarborough and Ottawa were overturned due to allegations of irregularities and ballot stuffing in the nomination process.
As for the Ontario Alliance, it became recognized by Elections Ontario as a new political party last fall. Jay Tysick, who was the chief of staff for an Ottawa city concillor, formed the party with other disgruntled PC members after, according to him, being kicked out of the PC nomination race in Carleton for pointing out the "shady business" in his riding association. "I believe I was removed because I was too right-wing, I was too conservative," Tysick later told iPolitics.
The seven point platform for the Ontario Alliance includes a pledge to balance the budget, the elimination of carbon taxes and the new sex ed curriculum, more choice and competition in healthcare, more powers for municipal governments, and more freedom for MPPs in the form of non-whipped votes.
"By championing democratic, bottom up, grassroots policies that reflect our Party’s Charter and Declaration of Principles, the Ontario Alliance looks to 'Bring us Back' to governmental accountability, transparency and integrity with the way we do business within the Ontario Legislature for the people of this province," says the APO website.
Meanwhile, veterinarian Pat Meyers and real estate consultant Ray Ferraro are the two candidates in contention for the Guelph PC nomination.There's no word on when that contest will be decided.

***Correction: Mooney's vocation has been changed from truck safety inspector.
Posted by Adam A. Donaldson at 6:33 PM