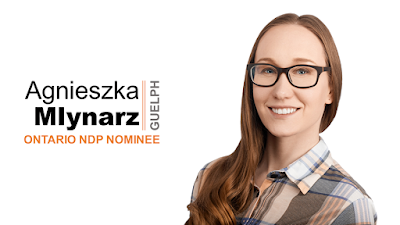 It's been hard for the NDP to make any news lately, but with time ticking down to the dropping of the writ for the June 7 Ontario vote they can't afford to others take the limelight. Guelph, it's time to meet a person that might end up being your New Democratic Party choice for MPP...
Tonight, Agnieszka (Aggie) Mlynarz announced her bid to be the NDP nominee for Guelph in the upcoming Provincial Election. "We need to elect a government with policies that support the services we use as residents in Guelph," she said in the press release.
Current Ward 2 City Councillor James Gordon ran for the NDP in Guelph in both the 2011 and 2014 provincial elections.
According to Mlynarz, she's a long-time resident of Guelph, and graduated from the University of Guelph with both a Bachelor and Masters of Arts. As the NDP candidate, she wants to focus on improving OHIP for women and trans people, stop unpaid internships and exploitation through temp agencies, eliminating interest rates for OSAP loans, and working towards a universal post-secondary education system.
The Guelph NDP have been gearing up for the election over the last few months, but haven't said much about the candidate, or candidates, that they were bringing forward for the nomination. Meanwhile, local Greens and Liberals have already acclaimed their candidates, Mike Schreiner and Sly Castaldi respectively. The Guelph PC riding association will be fielding one of two candidates, veterinarian Pat Meyers and real estate consultant Ray Ferraro.
You can find out more about Mlynarz and her campaign by visiting her website here.
Posted by Adam A. Donaldson at 10:30 PM