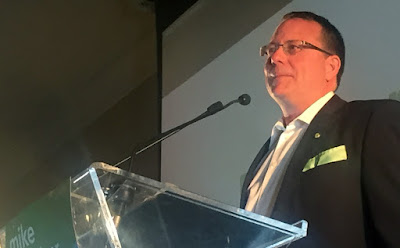 What was essentially an event for members, seemed more like a campaign kick-off as Mike Schreiner successfully energized the faithful at the Green Party of Ontario's Policy and Training Convention Saturday. Banking on big breakthrough in this June's election, Schreiner noted in his speech that if people in Ontario are hoping for change with the big three parties, "It’s like asking big beer to make craft beer, it’s not going to happen."


After a well-produced video backgrounder and a loving introduction from his wife and eldest daughter, Schreiner took the stage in the ballroom of the Deltra Hotel and Conference Centre in an atmosphere that almost made it seem like he had already won the race. The bass from the JXL remix of an Elvis Presley song sent the message that Schreiner, and the part,y was through talking and ready to run, but since this was a speech there was still some talking to do.
"I know that people across this province share our values, but people across Ontario tell me that they’re worried that the status quo at Queen's Park is failing to secure that future," said Schreiner. "The scandals and mismanagement of this government has put our future at risk," he added. "I say it because partisan political gains have real world consequences."
This wasn't just a swipe at the Liberals, Schreiner noted that "People are starting to lose trust in government when they see the big three parties play political games." He pointed to the issue on reformed fundraising rules, which the Greens, and Schreiner, came out early and often in favour of, and while eventually all parties agreed to changes, Schreiner noted that, "It was more important for them to figure out how to use that issue to bash the other political parties."
Occasionally having to pause to chats of "Mike! Mike! Mike!" Schreiner laid out a laundry list of policy directions including green energy jobs, a shift to 100 per cent renewable energy, the establishment of a living wage and universal basic income, tax reform for small businesses, improved healthcare including mental health, more and better transit, and an ongoing mission to fight systemic racism and sexism in the province.
Of course, Schreiner also put the "green" in Green Party by talking about the urgent need for action on climate change. "I refuse to let super storms and polar vortexes be the new normal for my children without putting up a fight," he said.
Schreiner warned that the Liberals are going to "pull out all the stops and hold on to power," but he believes that the Greens have everything they need to make a breakthrough in Ontario equivalent to ones in British Columbia and Prince Edward Island. "If we don’t vote for politicians that are honest with people, we won’t have honest people in politics, and I hope you respect me for that," he said.

After a full day of activities, the gathered Greens sat down to a meal and more speeches. Speakers including Muhammed Sayyid of the Guelph Muslin Society, York University Prof and solar power expert Jose Etcheverry who's also running in Markham, and Ottawa-Centre Green candidate Cherie Wong. Wong grew up in Hong Kong, and she said she holds democracy dearly because the friends she has there aren't able to do what she's doing right now and run in an election as a candidate.
The main speakers of the night though were P.E.I. Green Party leader Peter Bevan Baker and Green member of P.E.I.'s legislature Hannah Bell. The weather had stalled Baker's arrival at the conference centre, but his speech was a testiment to perseverance and belief that political idealism will one day pay off for people dedicated to public service. He himself ran in 10 elections before finally getting elected on the 11th try.
"We talk a lot about doing politics differently, and that has many, many layers to it, but perhaps the thread is the notion of less pretense with how we are in the world," Baker mused to his Ontario associates. "I'm not going to pretend that I have all the answers," he added. "It’s important to have humility and be honest and say, 'I'm not really sure about that. and not be judged by others for doing that.'"
Bell, meanwhile, ran in a special election when former P.E.I. education minister Doug Currie resigned suddenly in 2015. For her, it was not an easy decision to risk her career at a non-profit to try her hand at running for office. "I am a professional, I’m also a single parent, I have no savings, I have no money, and for me to give my notice to take a leave of absence meant that I could have no job at the end of that month," she explained. "Those are barriers that some people would never conceive of" when are asked to run," she said.
As for how to appeal to voters, Bell said people have to be given permission to hope and believe that political change is possible. "If we’re going to do this, if we’re going to win, even though everyone’s going to tell us we won’t, I do believe that you have to state your intentions," she said. "And if you're coming into something that’s impossibly huge, how can you make people believe if you don’t believe it yourself?"
The Green Party Convention concludes Sunday.
Posted by Adam A. Donaldson at 8:30 AM