City Council Preview - What's on the Agenda for the February 27 Meeting? 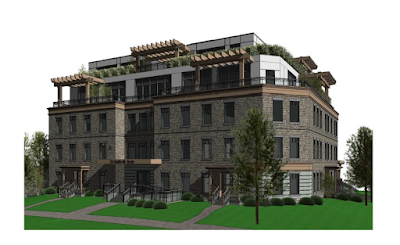 Remember in 2016 when a five-storey building was proposed at 75 Dublin Street, and the application was kind of rushed through to take advantage of a federal grant, and there was an outcry because the building was flush against Central Public School, and then staff said they could only build a four-storey building there, and then nothing happened? Well, back to square one (and we don't mean the mall in Mississauga.)


Statutory Public Meeting Report 75 Dublin Street North Proposed Official Plan Amendment (File: OP1706) - The completed application for this project was received on October 25, 2017 from Rykur Holdings, Inc, who were also the ones behind the previous proposal for 75 Dublin.
As you'll recall, staff came back to council with a recommendation on the original proposal for a five-storey development that said a build should be capped at four-storeys. Council voted on an amendment to allow the full five-storey development but it failed 4-to-8. Instead, council overwhelmingly supported the four-storey recommendation 10-to-2, and approved rezoning the site from I.1 (Institutional) Zone to a modified D.2-9 (Downtown) Zone.
Between then and now though, that 2016 proposal has gone to the next level at the Ontario Municipal Board. Rykur Holdings appealed the refusal of the Official Plan amendment at the OMB, and the decision by council to limit any development at 75 Dublin to four-storeys, while the City brought a motion to dismiss. Another wrinkle is the Guelph Old City Residents’ Association, who brought their own motion to repeal council's rezoning decision. All these motions were heard at an OMB Hearing back in November and are awaiting final decision.
The new proposal being brought forward by Rykur is oddly similar to the previous one: a 35-unit, five-storey development with 20 units dedicated to being classified as affordable housing. The proposal also asks for 37 parking spaces, which is the major change from the last proposal which asked for a more meager 24 spaces. Since the last zoning amendment is under appeal at the OMB, the land is still technically zoned as an I.1 (Institutional) Zone.
Council will merely vote to receive the report from staff. No final decision will be made as to whether or not the proposal is approved at this meeting. The OMB has not yet set a date for their decision on the development.
Posted by Adam A. Donaldson at 9:54 AM