Greens Gather in Guelph to Go for Good Governance 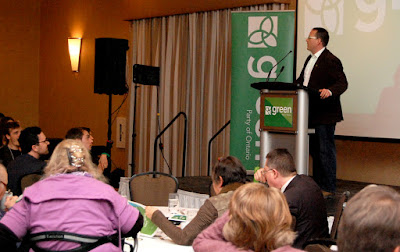 The Green Party of Ontario is setting the stage for what it hopes will be an electoral breakthrough akin to provincial victories in British in P.E.I. and British Columbia this weekend with their party convention at the Delta Hotel and Conference Centre here in Guelph.

The most wonkish part of the convention will take place Sunday when the members vote on the plenary, new resolutions that will modify the party's constitution or set out policy that will form the Green platform in the coming election.
Look ahead to Sunday, some of those measures that members will be voting on might have an effect on municipal matters. For instance, one resolution posits that a Green government will implement a brownfield fund to help municipalities remediate toxic land to be redeveloped. Another resolution lays out policy to preserve old school buildings, looking at ways they can me reclaimed, renovated or be made available as accessible community space.
The Greens also have a resolution to prioritize the electrifying of public transit systems, and to create dedicated funding for municipalities by adding one per cent to the provincial sales tax that can be rebated to communities to fund infrastructure projects. As for that HST, the Greens have a further resolution to support a general HST increase as higher corporate income taxes are "disincentive" of economic growth, and sales taxes appear to have "the least cost to economic activity."
On the affordable housing front, the Greens want to resolve to create tax incentives to encourage landlords with vacant units to rent those units out, create inclusionary zoning to make developers build one affordable unit for every 10 full-priced units, and to modify zoning to allow for tiny homes, secondary suites, laneway housing, and other innovations in housing options.
The policy proposals cover a wider-variety of issues from Indigenous relations, democratic reforms, education and healthcare policy, and yes, the environment. Much of the rest of the weekend convention will deal with workshops on voter engagement, election training, and panels on select issues of import like mental health and small businesses.

And Then There's Electoral Reform...

One of the main speakers at the convention is Dave Meslin, one of the minds behind Spacing magazine, Unlock Democracy, and the Downtown Defense Project. Meslin, a strong advocate for electoral reform and proportional representation, wanted to get Green members fired up against a system that's "rigged" against them.
According to Meslin, "parties have become these really weird negative, toxic cults." Meanwhile, he said, "kids are being raise with all kinds of choice and then they get into the voting booth and they only have a few choices."
The result is that ER doesn't feel as "fringe" or "crazy" as it once did, Meslin said, but the three main parties - Liberal, PC, and NDP - cannot be counted on to implement those kinds of reforms. He added that we've come to "embrace disruption in every sector except democracy," and that encouraging new people to get involved in governance, outside of the man parties, is like a business "start up that gets 10 per cent of the market but zero per cent of the profit."
So the solution? Meslin recommended looking at electoral reform beyond the provincial, or even federal, setting. He said that all aspects and all levels of governance, even down to student unions or local boards, would benefit from the fostering of new ideas about leadership. For example, why only one leader? How about co-leaders, a man and a woman? Meslin made the point whenever an organization looks for a single leader, the default is to picture a white guy.
More specifically, Meslin encouraged the Green members to put up pressure to make sure that Mike Schreiner is included in the leaders debate during the campaign. Meslin said that if Schreiner's in the debate, then his victory in Guelph will be assured, and another historic night in Green politics will be secured.
More to come...