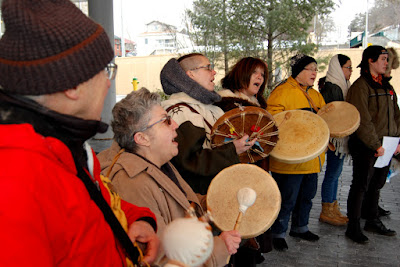 Like so many events held by First Nations people in Guelph, the demonstration Saturday called "Justice for Colten Bushie" began with drumming and song. The tenor though wasn't entirely somber as several speakers were emotionally upset, outraged, or both when speaking about the death of the Saskatchewan youth, the acquittal of Gerald Stanley the man who shot him, and the feeling that Truth and Reconciliation is just another promise broken after the verdict.


Over 100 people at Market Sqaure in #Guelph to demonstrate for #truthandreconciliation and for #justice for #coultenboushie.
A post shared by Adam A. Donaldson (@adamadonaldson) on Feb 17, 2018 at 10:08am PST


Despite the frigid air, and the overcast sky, over 100 people came out to take part in this expression of mourning and anger. It was a circle that almost filled the area in front of the doors of City Hall, with latecomers standing on walls to get a better view of the speakers and the ceremony.
"Today we gather to mourn the death of Colten Bushie, to honour his memory, and to protest the injustice of a murderer walking free," said Xicotencatl Lopez, an Indigenous youth that organized the demonstration. "Too many settlers have made it clear that they don't care about the suffering of our people, too many settlers want to see us irradiated like their predecessors did. They say that native people are thugs and that they deserve the death penalty just for trespassing, which I find ironic as one must wonder whose land do they think they are on anyway."
"I call to all native people in this country to rally together, to unify, to not take no for an answer, and to continue this fight," Lopez added. "I speak to the settlers too. You must de-colonize your mind, you must be at our side, you must listen to what native people have to say. Do not let this be forgotten. Do not let our teachings and our ancestors be forgotten. Do not forget Colten and his family."


After Lopez, several members from the local First Nations community spoke about their pain and outrage about the killing of Bushie. Outrage seemed to be a remedy to the pain though, and as another speak, Amber, tried to point out, people might have to get used to considering their history differently. "When you think about it, on July 1, Canada celebrated genocide being written into law," she said. "Those laws still exist in this country, and the only word for it is 'genocide'. I think one of the problems is that people are afraid to use a word that harsh, but that is the only word for it."
"Until we get comfortable with the idea of being uncomfortable, nothing's going to change," Amber added. "How is genocide allowed to continue in a country that is seen to be fairer than other first world countries?"
More angry questions followed. "How many more Colten Bushies? How many more Barbara Kentners? How many more will be missing and murdered? How many more until we stand up and reject the colonial death machine?" asked an impassioned Brad Evoy, a member of the Mi'kmaq First Nation, and organizational co-ordinator of OPIRG.
"It's clear to me that the state run process of reconciliation is a failure, it is a farce!" he said. "Every time we gather like this, every time we mourn, we say we want to build together, and build a new and beautiful Canada, but the fact is, friends, that we keep having to do this."
"If I sound angry it's because I am," he added. "Enough is enough!"
Roberta, a grad student at the University of Guelph, had difficulty trying to start her remarks being  moved by the display of solidarity and the circumstances. "It's important that we come together in situations like these, and all of the time, to address the systematic problems that are not going to get better without being together, working together," she said.
"I notice the people in my life that remain silent on this issue whether that's in person, on social media, or in the institution that I'm a part of," she explained. "I want to put a call out to the University of Guelph, and any institution that is listening, to make comment about things like this. Universities are places of privilege in our society, where a lot of big thoughts and ideas come from. Without that voice I don't know how far we're going to get." 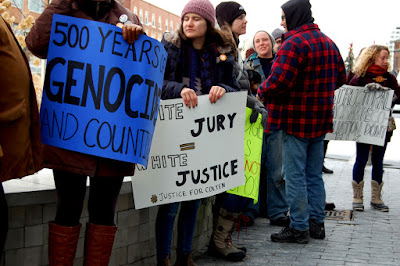 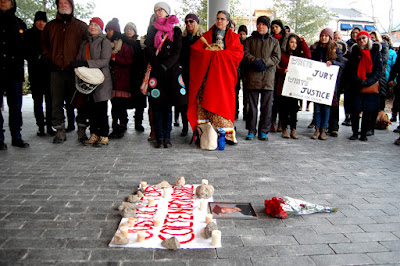 Sue, who called herself a settler, and said she was descended from the Arcadians, said that she is "so deeply appalled about what happened to Colten Bushie I can't even begin to tell you."
Sue also noted that she was a gun-owner and a hunter, and how those are responsibilities that she doesn't take lightly. "When I go out in the bush and I hunt, I do that with full awareness that if someone crosses my line of fire and I kill them, I did it on purpose," she said pointedly. "This man [Stanley] did not kill anybody by accident, and I'm so deeply, deeply appalled at the media twist about this being an accident. It was on purpose."
"I don't know what else to say but this young man should never have died," Sue added.
The last speaker, a young woman from the Red Rock band in northern Ontario said that while she's studying for her Ph.D. in Guelph, she thinks about her family back home and "Everyday, I'm worried that they're going to end up in the river."
"It's hard to be here as an Ojibwe person, on Haudenosaunee territory, also uninvited. I didn't ask to be here, I applied to the University of Guelph and I got in and accepted that offer without even thinking about it," she explained. "We all have a lot of learning to, and I'm just so happy that everyone came here today because I can go back into that school knowing that at least you here today are not going to make these comments: 'He deserved it.' Because he didn't. No one deserves this."
You can donate to a GoFundMe page to support the Bushie family here. You can also send a letter to the Lawyers' Rights Watch Canada to push for an adequate appeal and independent investigation of Bushie's death by clicking here.
Posted by Adam A. Donaldson at 5:07 PM