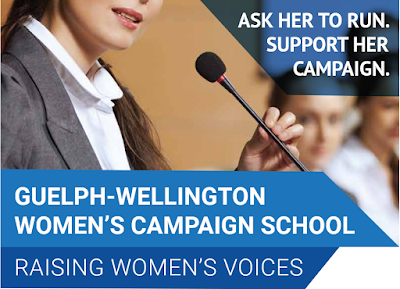 According to the United Nations, the make-up of any government requires 30 per cent representation by women in order to assure that the concerns of women are well reflected. In Guelph, four of the 13 members of our city council are women, which puts us at just over that 30 per cent mark. That's good, but we can be doing better.


It wasn't even 10 years ago that the make up of Guelph city council was seven out of 13 were women to men around the horseshoe, including the mayor, but in the present era of #MeToo and Time's Up, the imperative of getting more women involved in politics has only increased. Politics is a tough business though, and even if you want to run, what's the process or running? And how do you campaign, raise money, and do all the other things to win office?
This is where the Guelph-Wellington Women's Campaign School comes in. Organized by the Canadian Federation of University Women, and hosted by Ward 3 Councillor June Hofland, the school will teach female candidates, and their supporters, about the paperwork they'll need to fill out, coming up with a campaign plan, figuring out your message and communications strategy, and hopefully some answers to all of the questions that the perspective candidates might have.
Before all that though, we're joined on the podcast this week by two representatives of the CFUW, Barb Hale and Teresa McKeeman. We talk about the work of the CFUW, the reasons they've helped put together this campaign school, what kind of training women are looking for, what kind of challenges they face, and whether or not we're seeing an explosion of interest by women in running for politics because of current affairs.
So let's get into running for office like a woman on this week's Guelph Politicast!


The Guelph-Wellington Women's Campaign School is on Saturday February 24 at 8:30, and though it is sold out, you can reach out to organizers at gwcampaignschool@gmail.com or visit their website in order to stay up-to-day on future events, or to learn other ways to get involved.
The theme music for the Guelph Politicast is from the KPM Klassics collection by Syd Dale.
The host for the Guelph Politicast is Podbean. Find more episodes of the Politicast here.
Remember that the Politicast Podbean channel is also the host for podcast versions of Open Sources Guelph. The previous Thursday's episode of Open Sources will be posted on Mondays.
Posted by Adam A. Donaldson at 9:00 AM