City Council Preview - What's on the Agenda for the December 11 Meeting? 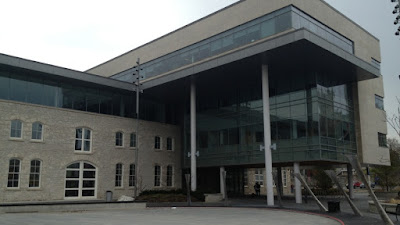 The final planning meeting of 2017 will definitely not have a "senior week" vibe as some big items come due including a plan to intensify Gordon Street, some new mid-rise standards, and a path forward for a big piece of land off York Road with some big expectations.
CLOSED MEETING: C-CON-2017.18 Public Appointment to the Board of Trustees of the Elliott

CON-2017.55 1 & 15 Stevenson Street North and 8 William Street Proposed Zoning By-law Amendment and Draft Plan of Vacant Land Condominium File: ZC1613/CDM1609 - South of Grange, and north of the train tracks, these three parcels of land are being eyed for a rezone from “Residential Single Detached” (R.1B) to a “Specialized Single Detached” (R.1D-?) Zone. A house at 15 Stevenson Street North will be demolished to make way for two smaller detached homes, and a 7-unit condo development directly behind it. The houses that presently sit on 1 Stevenson Street North and 8 William Street will be retained though.
Draft Built Form Standards for the Gordon Street Intensification Corridor - As you may have heard, the City of Guelph has to cram in tens of thousands of more people in the next 15 years, but where do you put them? How about along Gordon Street in an "intensification corridor"? The vision is to make Gordon Street "a vibrant, pedestrian friendly street framed by mid-rise buildings, continuous rows of healthy trees, and active at-grade uses that engage the street and the sidewalk," and that means creating a plan that includes guidance to make sure future development fits (using the mid-rise and townhose build form standards to be discussed later), and to find opportunities for developing parks and open spaces. Among the principles are creating appropriate building forms, enhancing north-south and east-west connections, fostering variety and flexibility in building forms, the creation of pedestrian connection, innovative stormwater management like green roofs, and to promote sunlight, views, and privacy. Public and stakeholder comments on the standards will be received by the City until January 15.
Draft Built Form Standards for Mid-rise Buildings and Townhouses - You may have noticed that there are more and more townhouses and multi-residential buildings going up around town. We should probably have an idea on how to cope with this growing trend, right? Enter this draft version of new build form standards. The standards cover a variety of areas including sustainable design, common amenity space, landscaping, parking, tree planting, lighting, rooftop mechanicals, scale, and utilities and waste collection. Like with the Gordon Intensification Plan, the public and stakeholders are being invited to submit their input on the plan until January 15.
Guelph Innovation District (GID) Real Estate Options - Over the last year, Business Development and Enterprise Services and Strategy, Innovation, Intergovernmental Services, and the Mayor's Office have been exploring with Infrastructure Ontario the disposition and development of the lands known as the future site of the Guelph Innovation District. Staff is recommending that the City now explore the possibility of a direct sale of the lands from the Province to the City so that Guelph can conduct its own Request for Proposals from developers to start achieving the objectives of the GID Secondary Plan. Furthermore, staff is asking for council's permission to allow for the RFP to be implemented through the period of potential "Restricted Acts" AKA: the main election period between the last meeting of council in July, and the swearing in of the new council at the beginning of December. Costs? Yes, there will be upfront costs if the City is able to buy the land, but the expectation is that all costs will be recovered when the RFP is received and implemented.
Posted by Adam A. Donaldson at 9:30 AM