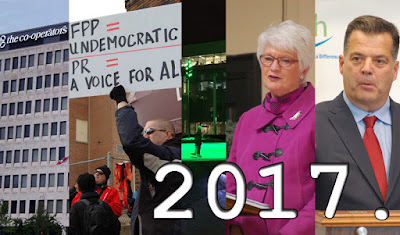 It's the end of the year, and that means that it's time for lists. Lists and more lists. Top 10s on every conceivable subject. Guelph Politico also likes to do lists this time of year, and the subject we chose is the Top 10 Guelph Political Stories of the Year. From retirements to mergers, from reviews stalled and reviews achieved, and from one renovation project nearing completion to another finally making it on the books, it was another busy year in the Royal City. Let's countdown the hits in order...
10) Officially Official. Nearly five-and-a-half years after it was passed, the latest amendment to the Official Plan got the thumbs up from the Ontario Municipal Board. Passed in 2012, Guelph developers were operating in a kind of planning grey area as certain changes were anticipated, but had yet to go into effect. With Guelph's condo-boom marching forward unabated, the duality of planning around the implementation of the plan was showing its strain with some local developers, but in October the clouds parted and Guelph has given the go-ahead for OPA 48. Not a moment too soon.