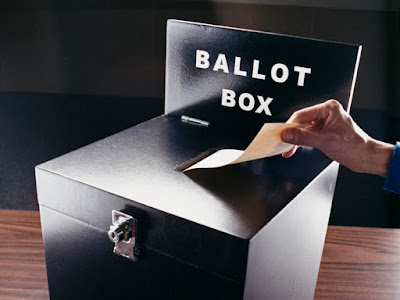 It was a cold and snowy day on January 2, 2014 when then Councillor Cam Guthrie announced his intention to ask voters for a promotion to mayor. For Mayor Guthrie, and all other people considering a run in the 2018 Municipal Election, be advised that nominations don't open until conditions are a little better for an outdoor announcement.


Let's start with the dates. Instead of a nomination window of over eight months, the first day you'll be able to file your nomination papers is Tuesday May 1, and the last day is July 27 at 2 pm. Per the last election, the positions open for nomination are outlined below, but note that the school board composition may be subject to change:
Now that you know the who and the when, let's fill in the what. The big change to the paper work this time is that along with the forms the candidates themselves will have to fill out, they will also have to get 25 signatures each from people eligible to vote in the municipality on the day the nomination form is signed. That only applies if you're running for mayor or councillor though; nominees for school board trustee don't have to collect signatures.
Other than that, it's the same old process: you take your nomination form and $100 filing fee ($200 if you're running for mayor) to the city clerk at 1 Carden St. Sorry, you can't mail it in, only the original forms with their original signatures can be filed.
Now once your papers are filed, you're going to want to do the next thing, which is raise money! There have been changes to campaign finance rules too for the coming election, primarily that corporations and trade unions are no longer eligible to contribute to municipal campaigns, and that includes council, mayoral and trustee races. On the other hand, any candidate selling items for under $25 that revenue counts as campaign income and not a contribution. This loosens the rules for fundraising in a manner, because it means that if a campaign sells "Vote for [Mr. X]" t-shirts for $20, they don't have to issue receipts, and they don't have to make sure the person buying the t-shirt is eligible to give a campaign donation.
Now about those corporations and unions. While they can't give to campaigns, they can participate in third party advertising. What is that? A third party ad can be statement for or against a candidate, or advocating in favour or against a ballot measure. The ads though cannot be issues-based so that "groups that do public outreach can continue their issued-based advocacy work throughout the municipal election period," according to the Ministry of Municipal Affairs website. Example? How about this ad below by the Working Families Ontario group...


Most campaign finance rules will still apply to the third part advertisers, with spending and contribution limits, and a requirement to register in the municipality where they want to advertise. The framework for third party advertising will go into effect on April 1 exactly one month before nominations open.
So now you've got some money. Now what? That's really up to you, the candidate. There are no set rules from the Municipal Elections Act, but the City of Guelph is looking at some changes to its own sign bylaws with specific reference to election signs. Stay tuned for more news about that in the near future.
It's also up to every candidate to decide on the method and amount of information they make available to voters, organization of debates and all-candidate meetings are left in the hands of community groups, and there are no rules barring people from running as a slate or campaigning jointly.
There are still some limitations though. New rules were passed this fall that prevent candidates from using the interior of City facilities for election-related purposes, including City Hall, and although candidates can campaign outside City facilities, there's no campaigning allowed in Market Square. For present city councillors and staff, no city property - including computers, PDAs, or cell phones - can be used to conduct election business, and the City of Guelph logo, crest, flag, slogan, et al can't be used for election purposes. In fact, City of Guelph employees are outright barred from engaging in political activities, save for voting of course.
If you don't want to run for office, you may like to vote. The list of electors for municipal elections in Ontario is compiled from data from the Municipal Property Assessment Corporation (MPAC). If you haven't moved in the last four years, then you're probably good, but if you've moved around since 2014, it may behoove you to make sure your voter information is in order.
You can add or alter your information any time by filling out the Application to Amend the Voters’ List, and mail it to the City Clerk's office, or by dropping it off at the ServiceGuelph front desk on the ground floor of City Hall. In September, you will be able to update your information electronically through the City of Guelph's election website, but it all else fails, you'll still be able to register to vote on Election Day itself with the proper identification as outlined by the Ministry of Municipal Affairs here.
Voter Notification Cards will be mailed to all eligible Guelph voters on the MPAC list sometime near the end of September. There will be advanced polls, but keep in mind that there will be no internet voting for the 2018 election, so everyone will have to get out to the polls the old-fashioned way.
Whatever happened to the ranked ballots? Good question. Queen's Park allowed for the option when they amended the MEA in 2016, but Guelph followed the widespread trend in the province of turning down the offer from Queen's Park to enact ranked ballots for the 2018 election. A brief internet search suggests that only the City of London is going to use the option next year, while Kingston is going to hold a plebiscite on the matter.
And last, but certainly not least, mark the date on your calendar that Monday October 22 is Election Day! You can find more detailed information the procedures for the 2018 election by clicking here.
Posted by Adam A. Donaldson at 9:39 PM