The 41 Conundrum: The University Express Only Runs Uninterrupted One-Third of the Time 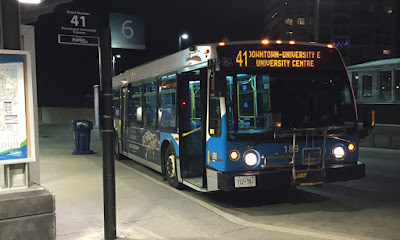 To the credit of Guelph Transit, they have gotten better at letting riders know about service interruptions via social media since September. If you've observed that feed carefully though, you will have noticed a definite trend, and it concerns one of the new high-frequency routes meant to service the university corridor along Gordon and help the congestion. The #41 Downtown-University Express, during a one-month period, only ran without service interruptions every one out of three days.


The #41 bus is supposed to run every 10 minutes Monday through Friday, and every 30 minutes on the weekend on a route from Guelph Central Station to the University Centre and back again with only two stops in-between both ways. Looking at the announcements of service interruptions on the Guelph Transit Twitter feed though it seems that frequency of service is more ambitious than factual.
Over a 32-day period from October 10 to November 10, 22 days featured some kind of service interruption, although the length and type varied.
For example, on October 10 access to Gordon was mitigated due to scheduled water main cleaning, which was an inconvenience, but one that was scheduled in advanced, so commuters knew it was coming. On October 11 and 12 it was much of the same as construction work on Gordon necessitated detours.
But those are just three examples of advanced-notice, pre-planned disruptions to the route, and they are the only three examples. On October 13, a Friday, Guelph Transit posted three tweets concerning the #41: first service was cancelled between 2:46 and 3:56, then it was cancelled between 2:15 and 6:55, and then it was cancelled until further notice.
This was more or less the theme of service on the Downtown-University Express during this period. Of the 22 days with service interruption, aside from the three for construction, only four saw limited service interruptions on the #41 whether that was for a singular run or for a couple of hours before continuing as usual.
More often than not though, the interruptions were widespread. Sometimes it was of minor annoyance, like on November 10 when service on the #41 saw one run every 30 minutes cancelled from 2:15 till 10 pm. But there were many times that a tweet would be posted that looked something like this:

In a four-day period between October 29 and November 1 there was some complete or partial cancellations on the #41 everyday, including dropped buses during rush hour in the morning and the evening, when travel to and from campus is busiest. Explanations? The closest that transit users have gotten was this tweet poster on October 21.


Our riders matter- it's frustrating when we miss runs. We’ve had a higher than normal number of staff cancel shifts; we are doing our best.
— Guelph Transit (@guelphtransit) October 21, 2017

There's some important implications here for Transit to sort out because falling back on the #99 Mainline is problematic. The point of the #41 is to specifically service commuters travelling from downtown to the university by giving them a direct route, thus easing demand for those looking to stop in between and to ease demand at certain stops.
Transit users know that there are certain stops, at certain times of day, where space gets very tight on the bus, and this might be tough to endure if you're taking the 40 minute trip from the south end to the north end and you end up getting squeezed when you hit the University Centre. Also, it's tough getting off the bus if you squeeze past 20 or 30 people between you and doorway.
So if the #41 Conundrum going to be fixed? Can it be fixed? Does Transit have enough staff to make this work, or is this new system flawed and in need of correction? Stay tuned.
Posted by Adam A. Donaldson at 10:55 PM