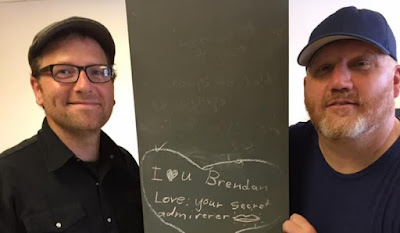 There were 21 speakers on public delegation night for the 2018 Tax-Supported Operating Budget, and over half of them were there to support the Guelph Neighbourhood Support Coalition. That's 11 people, who all showed up to speak with the backing of a room full of supporters, either representing themselves, the coalition, or partner agencies that work with the coalition like the Guelph Police Service, and Wellington-Dufferin-Guelph Public Health. What kind of organization drives such passion?
Why not ask the source? That's Brendan Johnson, the Executive Director of the GNSC. The basis for his group's appearance at council last week was that they need a top-up of $100,000 in addition to the assistance from the City of Guelph they already get. The risk, said Johnson, is that the coalition may not be able to offer the same level of services without the additional source of secure funding, and the GSNC has enjoyed such success, how could the City refuse?
Johnson makes that point on this week's podcast, but what follows is also a philosophical discussion about why the Guelph Neighbourhood Support Coalition exists, how it facilitates between local leaders and the sometimes chilly bureaucracy of various levels of government, and how the neighbourhood groups he works with are incubators of democracy. The council meeting delegations, he says, are evidence of this, as regular, everyday people in their own backyards take leadership positions to address the unique challenges there. In the end, all politics are local as they say.
So for this edition of the podcast, we talk to Johnson about why and how the coalition does what it does, the results he and others are seeing because of those efforts, and why his group has grown at such a lightning pace in the last couple of years. It's hard to say if anything was resolved, or explained, in this discussion, but I found it a refreshingly almost non-political political discussion.
So let's talk about neighbours helping neighbours being helped by coalitions, and why all of that is awesome on this week's Guelph Politicast.


To learn about the Guelph Neighbourhood Support Coalition you can visit their website here. To learn about the fate of the GNSC's ask for an additional $100,000, the final 2018 Tax-Supported Operating Budget will be voted on during the council meeting on Tuesday December 5 at 2 pm.
The theme music for the Guelph Politicast is from the KPM Klassics collection by Syd Dale.
The host for the Guelph Politicast is Podbean. Find more episodes of the Politicast here.
Remember that the Politicast Podbean channel is also the host for podcast versions of Open Sources Guelph. The previous Thursday's episode of Open Sources will be posted on Mondays.
Posted by Adam A. Donaldson at 9:00 AM