New Transit Contract Ratified, Both Sides Have Eye on the Future 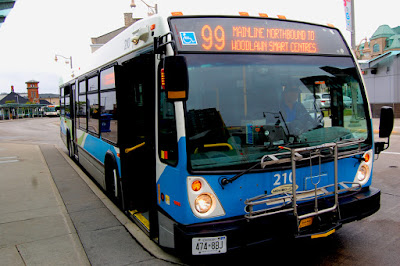 After being ratified at City Council last week, members of the Amalgamated Transit Union Local 1189 did their share and ratified the new collective agreement on their end, and thus securing labour piece between the City of Guelph and its transit employees. Now's the part where we learn the details.


In the new four-year contract, ATU 1189 members will receive a pay increase of 1.75 per cent in 2018, 2019, and 2020, and a two per cent increase in 2021. As to the financial implications in terms of the presently debated budget, the City says the 1.75 per cent increase for next year has already been taken into account.
In the City press release announcing the ratification, it was added that, "The agreement also allows for flexibility to ensure the City continues to develop its transit services to meet the growing needs of all of its residents." David Godwaldt, General Manager for Human Resources, expanded on what that meant when asked for comment from Guelph Politico.
"Before we look at how we can address the future transit needs of our community, we need to understand what is working and what is not; where we are today — that’s where our Transit Review comes in next year," Godwaldt said via email. "We’ll work with our staff members and union executives during the review to ensure we find the 'how' we can improve."
Andrew Cleary, President of ATU 1189, was asked a similar question. "ATU 1189 worked very hard in securing a fair collective Agreement for it's members and the taxpayers of Guelph," he replied by email. "In doing so we hope that we can help grow the system for needs of all transit riders with an expansion to service hours and routes."
Cleary added that the service has to expand to provide a system for everyone saying, "We need to ensure that everyone can get to Medical appointments Church and errands of basic needs also the worker's to thier jobs."
Transit has been the subject of a lot of controversy since the route and schedule re-alignment in September with several hundred complaints being received about dropped runs, and miscommunications. Without being prompted, Cleary said in no uncertain terms that problems with operators over the last few months has not been a negotiating tactic.
"ATU 1189 showed commitment in bargaining this deal to ensure no service disruption," he said plainly.
The complete agreement has not yet been posted to the City website. The agreement is effective retroactively to June 30.
Posted by Adam A. Donaldson at 8:30 AM