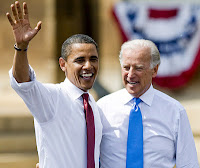 It didn't take long for the Obama-Biden ticket to start cranking out the counter spin to today's announcement of Congressman Paul Ryan (R-Wi) as Governor Mitt Romney's running mate in this fall's U.S. Presidential election. Surrogates on behalf of President Barack Obama and Vice-President Joe Biden sent out two e-mails in eight hours to supporters in an effort to start deflating the GOP's celebratory mood, by attacking Ryan on his background and policy, particularly his proposed federal budget, Roadmap for America’s Future, which includes new tax cuts, deep spending cuts and privatization of entitlements like medicare.
Here's the first e-mail that cam in just after noon:
Paul Ryan will be Mitt Romney's running mate.
What you need to know right now: This election is about values, and today Romney doubled down on his commitment to take our country back to the failed policies of the past.
Congressman Paul Ryan is best known as the author of a budget so radical The New York Times called it "the most extreme budget plan passed by a House of Congress in modern times." With Mitt Romney's support, Ryan would end Medicare as we know it and slash the investments we need to keep our economy growing -- all while cutting taxes for those at the very top.
Over the next few days, Romney's campaign and its allies will tell a very different story about Paul Ryan.
Our job is to make sure Americans know the truth about what Romney's choice says about him as a candidate and leader, and to stand with President Obama and Vice President Biden at another major moment in this campaign.
And here's the second one that came in just after 8 this evening:
This morning, Mitt Romney and Paul Ryan stood on a platform in Norfolk, Virginia, and introduced themselves to the country as "America's Comeback Team."
"Go Back Team" would be more appropriate -- because a Romney-Ryan administration is the definition of a fast track back to the failed, top-down economic policies of the past.
In Ryan, Romney has selected a running mate best known for designing the extreme GOP budget that would end Medicare as we know it, and -- just like Romney's plan -- actually raise taxes on middle-class Americans to pay for an additional $250,000 tax break for millionaires and billionaires. As a leader of the House Republicans and a Tea Party favorite, Congressman Ryan has led the relentless, intensely ideological battle for these kinds of budget-busting policies that punish seniors and the middle class.
Today, Romney doubled down on those policies.
But most Americans don't know Paul Ryan. In the coming days, the other side will spend a lot of time trying to define Romney's choice and what it says about his candidacy -- so we put together a brand-new website on Romney-Ryan with everything you need to know.
Check it out, watch the video, and then show your support for President Obama and Vice President Biden by sharing it with friends and family.


The "Go Back Team" isn't as catchy as "Romney Hood," another little bit of alliteration that Obama concocted this week, but one thing is certain: this lately dull campaign is about to get a lot livelier.
Posted by Adam A. Donaldson at 12:35 AM