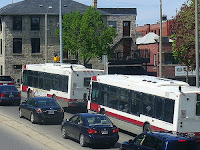 Attention all bus riders in Guelph, there are some slight changes a foot that are going into effect on September 2. The changes are both situational and financial. Situational meaning that there are some slight changes to the routes and running times, all of which are listed below. As well, the platform assignments at Guelph Central Terminal and the University Centre at the University of Guelph are playing musical buses, apparently because Transit is monitoring people's migration and decided on a better arrangement.
But all this is fairly standard. The real gist is that September comes with a price increase for your bus pass. Right now for a monthly adult bus pass, the cost is $72, but a three to four per cent increase translates as a $2 to $3 increase in amount of money. The increase was approved by council in this year's budget.
Here's the full press release from the city:


GUELPH, ON, August 20, 2012 – On September 2, Guelph Transit will implement new route changes to add capacity and improve service to residents, visitors and students.
As part of the Guelph Transit Growth Strategy, providing service to growth areas allows the City to move toward its long-term vision of making transit the preferred transportation choice in Guelph.
Transit changes effective September 2 will include:
“These service updates will make riding Guelph Transit more efficient and help riders get to their destinations faster,” said Michael Anders, General Manager, Guelph Transit. “We’re listening and responding to riders’ concerns, and these updated routes will improve service in Guelph’s growing south end.”
Changes to platform locations are based on months of observing transfer patterns in Guelph Central Station and the University Centre.
In addition to platform and route changes, a fare increase will be implemented on September 1 as approved by City Council in January 2012. Tickets and passes will increase by three to four per cent, cash fares will remain at three dollars. Prices for Affordable Bus passes will not change until January 1, 2013.
For more information on Guelph Transit route and platform changes and fare increases, please visit guelphtransit.ca.
Posted by Adam A. Donaldson at 3:54 PM