Game On For Not One, But Two By-Elections 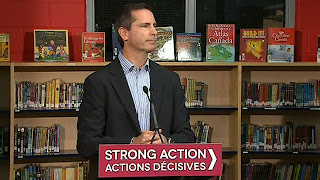 In the midst of this summer of discontent, Premier Dalton McGuinty is going for the double down. Needing to win one seat to keep his minority government seat count at 53, and needing to win two in order to achieve his slight, but coveted majority, McGuinty announced today that the voters in Vaughan and Kitchener-Waterloo will go to the polls on September 6th.
Vaughan came up for grabs last week Greg Sorbara resigned in order to run the Liberals' election campaign, meanwhile Elizabeth Witmer resigned her K-W seat last spring when McGuinty appointed her to the head of the Workplace Safety and Insurance Board. The latter was considered a sly move by the Liberals to try and seal the deal majority-wise speaking, but Sorbara's departure makes things a bit more problematic. If the Liberals lose one race they keep the status quo, if they lose both it could point to bigger problems for a party already under siege less than a year after being elected for a third term. And in another bizarre turn, the Liberals have yet to select a candidate in K-W, the riding association doesn't vote till tomorrow night.
So what's next for the provincial Liberals and the voters of Vaughan and Kitchener-Waterloo? We'll try and keep you posted here over the next couple of weeks.
Posted by Adam A. Donaldson at 11:36 PM