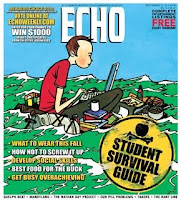 To everybody that read my Echo column, you may have noticed a bot of, ahem, stuttering so far as the little headers went. Not sure what happened there, but in the interest of clarity I provide below the complete article with the proper headings.

How I Spent My Summer Vacation

Well, that went by fast. Summer that is. And as we enter the Labour Day long weekend, it is time to take stock of the last few months and remember what we all came here for as we re-enter the routines of autumn. I don’t know what you did/learned/talked about, but here’s my five for the Summer of 2010.

1) Waiting for the Bus

This happened a lot. But in this case the context is outside the fact that one goes to their bus stop by a pre-arranged time and wait a couple of minutes for the city’s public transportation to show up as scheduled. But then, when you make it downtown, there was the indignity of watching the bus you needed to transfer to drive away without you. Then, to add insult to injury it seemed to come as almost a surprise to city councillors at a July meeting that our transit system needs improvement. Perhaps if more city officials were dependent on the bus, they wouldn’t need a consultant’s report to tell them that changes are needed.

I have a philosophy about the weather: of all the things in the world to complain about, why would you complain about the weather? Can you change it? Can you make a rainy day sunny by thinking about it, or via some kind of weather-changing device? That’s what I thought. Well the same can be said about road construction. Sorry kids, but when you’re over five years behind on infrastructure repair and the government throws money at you to get ‘er done, you’re not going to refuse the opportunity. After all, today’s road closures avoid tomorrow’s sinkholes.

3) Getting Bitch Slapped for Being an Artist/Activist

Not sure where all the litigation came from this summer, but first the police slammed shut the doors of the Medical Cannabis Club of Guelph and then the city bylaw officers started slapping postering fines on anyone with space available to a concert, a screening or a protest. Granted, I’m biased given one of the hats I wear is Co-Chair of Ed Video Media Arts Centre (PS: See our ad on whatever page it’s on in this issue of Echo), but still, with the Alma Gallery closed and Manhattans smoked out, the number of venues in our fair city is dwindling. Never has a piece of 8 and a half by 11 piece of colour paper generated so much red tape.

Perhaps it’s the American election cycle of one-after-the-other, but I’ve been dying in anticipation for the start of our municipal election season. But while it’s been fun to watch the scorecard in Wards One and Two fill up, it’s been something of a struggle to get candidates to sign-up in the other four wards. In the last couple of days though (before press time anyway), a few people have put their names forward for the school board elections, so I’ve got my fingers crossed that this is the trickle before the rainfall. You can’t say that there’s not anger out there, and people are looking for options. So let’s give it to them.

Despite our problems, there’s still a lot to love about the City of Guelph. Aside from the usual summer trappings like Hillside and Art on the Street, the festival circuit was joined by the first ever editions of the Guelph Electronic Music Festival and Top Freedom Day. As well, the Guelph Jazz Festival has added a Nuit Blanche program, which will feature all different types of music and art installations across the city. You may not be able to DIY promote your own show, but if you keep your eyes open, there’s plenty to get excited about.
Posted by Adam A. Donaldson at 11:39 PM