Leaders Debate? Schreiner Says He'll Be There With "Grassroots Demand" 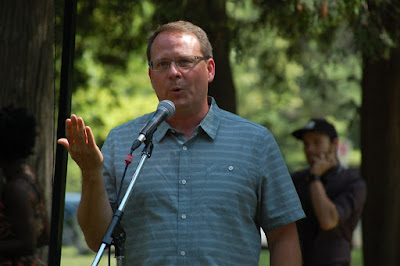 Despite a grassroots effort, a Change.org petition, and the seal of approval from the Premier herself, a consortium of broadcasters announced yesterday that Green Party leader, and Guelph MPP candidate, Mike Schreiner will not be taking part in the main televised leadership debate on May 27. Schreiner, himself, is not impressed.


"I'm deeply disappointed, but I'm mostly disappointed because this is a slap in the face to the people of Ontario," Schreiner said to Guelph Politico by phone this morning. "They know the status quo isn't working and the only way to deliver change is to hear from parties like the Green Party."
That follows a comment from Schreiner in a Green Party press release last night. “The formula for leaders debates should not be one that reinforces status-quo politics," he said. "To keep me out of the debate is to censor the solutions that our party deserves to share with Ontarians, and that Ontarians have a right to hear.”
The consortium, which includes CBC, CHCH, CPAC, CTV, Global News, and TVO, announced their decision yesterday in a press release, saying, "The debate is open to all party leaders running candidates in all Ontario ridings that currently have an elected MPP sitting in the provincial legislature. As such invitations have been sent to the leader of the Liberal Party of Ontario, the leader of the Ontario Progressive Conservative party, and the leader of the Ontario New Democratic Party."
Schreiner however thinks that there should have been a broader mandate for inclusion in the leaders debate. In 2016, the Ontario legislature voted unanimously to pass campaign finance reform that included a $2.71 per vote annual subsidy for political parties based on the number of votes received in the last election. For the Green Party, that means $630,000 for the 2018 election.
"I want to be very clear: I want to be held accountable by voters, and the best way to hold me accountable is to be in the leaders debate, and for the four leaders that qualify for election funding to be on the stage," Schreiner said.
The debate announcement came a couple of hours after Premier Kathleen Wynne said at a Black Community debate in Toronto that "It’s really important for people in this province to have the opportunity to hear from all of the leaders," including Schreiner. The Green Party leader was at that debate, as was NDP leader Andrea Horwath. PC leader Doug Ford held a campaign rally in Sudbury as part of a three-day campaign swing in northern Ontario.
"I want to thank the Premier for saying we need more democracy, and people deserve to hear from all four party leaders," Schreiner said. "I certainly hope the two other party leaders will say we need more democracy."
A petition started by election reform advocate Dave Meslin on Change.org to include Schreiner in the debate has over 9,400 votes as of this morning, and has seen a burst of new support since the announcement late yesterday afternoon. Schreiner calls it "grassroots demand," and while he's been invited to participated in other leaders forums and debates, the Green leader knows that the broadcast debate matters most to get his message out there.
"The main debate is the televised leaders debate, that's the big show, that's the one most people will be tuning into," he said.
And Schreiner is confident that they will be tuning in to see him when the debate begins at the CBC Broadcast Centre at 6:30 on May 27. "I will be participating in the leaders debate because the people of Ontario are going to demand democracy and they're going to put pressure on the two other party leaders," he said. "We haven't given up the fight."
Posted by Adam A. Donaldson at 9:00 AM