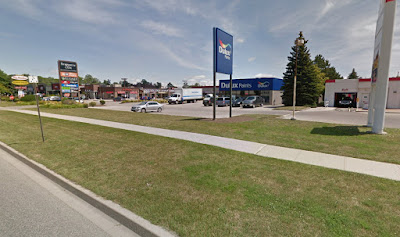 Guelph wasn't the first on the list to get a legal cannabis store, but we are one of the first to get a location for ours. The LCBO, and its legal post subsidiary the Ontario Cannabis Store (OCS), announced Wednesday where four of the government pot shops will open this summer. Appropriately enough, the Royal City's OCS will open nestled near a number of snack-friendly locations in the plaza across from, appropriately enough, Stone Road Mall.


The precise address is 304 Stone Road West, which is along the stretch between Edinburgh Road South and Stone Road Staples' location. The likely set up is the Dulux store pictured above, which closed and moved locations to Gordon Steet at Kortright since that Google Maps image was taken. Of course, selection of the OCS store had numerous considerations, as the press release from the company outlined.
"Consistent with provincial guidelines, store locations adhere to municipal zoning by-laws, minimize proximity to primary and secondary schools and consider where illegal storefronts are currently operating. Input received from municipal officials through engagement with the LCBO on local areas of interest was also used to inform the identification of OCS store locations," it reads.
There's no idea yet on what the new stores might look like, "designs are being developed" is all the press release says on that. We do know that there will be a lobby like area in the front entrance, information on available products and accessories, and a focus on responsible use and information will be present. Shopify is developing the technology to be used in the store locations, and the 19-year-old minimum age for purchase will be strictly enforced.
If you have any thoughts, issues, or concerns about the new OCS, you can offer your feedback by clicking here.
The other three locations announced are 770 Gardiners Road in Kingston, 2480 Gerrard Street East in Toronto, and 570 Harbour Expressway in Thunder Bay.
Posted by Adam A. Donaldson at 10:30 AM