Dorgo Makes a Case for Himself as PC Nominee 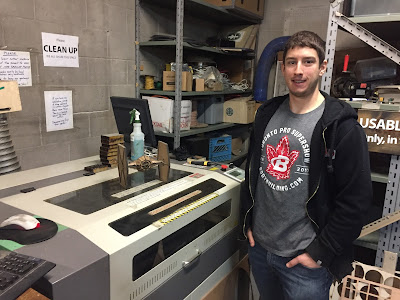 Steven Dorgo is at his most animated when talking about the possibilities of Diyode, Guelph's "do-it-yourself" community workshop. Dorgo says life is about more than you're job, it's about unwinding from that work stress, indulging your creative instincts, and using your hands to make stuff. It's something he thinks that the present provincial government hasn't taken into account, which is one of the reasons why he wants to run for office... as the PC candidate.


"We've seen what Kathleen Wynne is doing, she’s trying to buy as many votes as possible," Dorgo explains. He refers specifically to the promise for $2.2 billion for free preschool childcare for kids aged two-and-a-half to junior kindergarten. "As a 26-year-old, my four-year life plan includes kids, but also seeing the debt and the way that money is managed in this province, it's atrocious."
Many, and not just Progressive Conservative Party members and supporters, would agree, so why not get behind one of the two previously announced nominees - veterinarian Pat Meyers and real estate consultant Ray Ferraro - in the PC candidates race?
"I've seen the Guelph candidates waiting for a big name to come in, and now it's up in the air, and I truly believe that I am the greatest representative that this community has," Dorgo says. "I can get the community behind me, I can promote the PC party, and sell them to the people. I'm grassroots."
Dorgo is a graduate of the University of Guelph in Economics and Business Administration, and like a lot of Guelph students, he's got agriculture in his background, and in his blood. His father owned a small abattoir in Milton, and, for a time, business was good, but Dorgo blames over-regulation by the Liberal government for putting the family slaughterhouse out of business.
Describing himself as a "true Guelphite," Dorgo has volunteered with the Boy Scouts of Canada, and Meal Exchange at the U of G, and dabbles in backyard chickens, preserves, and soon beekeeping, he just built his own hives using the facilities at Diyode. "I’m a hobbyist!" he says. For money, he works construction and landscaping. Sometimes that work is seasonal, and sometimes it means 70 hours a week of hard labour, which doesn't leave a lot of time for politics, but Dorgo knows what speaks to him.
"I’ve always followed politics, but I didn’t get involved until Doug Ford entered the race," Dorgo says. "Ford Nation is not just the tagline 'Subways, Subways, Subways,' it’s about being a representative for your community. Ford Nation is about helping the little guy, about being grassroots, and a true representative of the people that vote you in. That's what Ford Nation is about."
So why vote Dorgo? "I don’t believe that either candidate that the PCs have right now will win the riding of Guelph," he says. "I fully encompass the Guelph spirit. I've worked with the community, I know the red tape, and I know how much there is. I believe I can help."
Dorgo feels particularly fired up because he hasn't seen the local PCs as particularly active in the race so far. "There’s been nothing in the news, no one’s said anything, no one’s making June 7 happen," Dorgo says in frustration."No one's going out there and talking about issues in the community, and there are issues, so many community groups trying to help people out, but no one’s talking about this."
Among Dargo's priorities are representation for Guelph, the debt, water conservation, the environment, and agritech. "Out of all the cities along the 401 corridor, Guelph's the furthest from the 401, so we've got a lot of room to expand," he says. He also supports the deregulation of the legal cannabis business, which Ford has also said is one of his priorities should the PCs win office.
There's also another demographic consideration: "Queen's Park is way underrepresented by young people. The only qualification I need is the approval of the people that want me to represent them," Dorgo adds.
Dorgo's been talking to community organizations and people within the local PC riding association about supporting his bid. Right now though, his focus is on collecting the 20 signatures he needs to be on the ballot for the PC candidacy, and then he wants to talk to people to find out what they need, how to improvement business, and cut red tape. "People in the community have ideas, but they never get passed on because they don't have someone they can relate to," Dorgo says.
"It's been a long cold winter, let's get the people out, and let's get talking to them. Let's have some barbecues!" Dorgo says. "By the way the 'long cold winter' was a metaphor for the last 15 years."
Posted by Adam A. Donaldson at 5:03 PM