GUELPH POLITICAST #121 - What Happened in Syria? 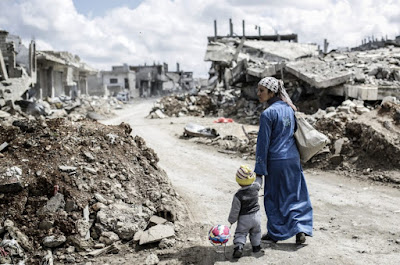 7 years, 1 month, 1 week, and 3 days. That's how long the Syrian Civil War has been raging. Most of us understand that there's a crisis there, but do we understand the extend of that crisis? Do we understand who the players are? Do we know why they're fighting? Is there anything that we can do in Canada to address such a huge international crisis?


These questions, and more, were addressed in a talk a few weeks called "What Happened in Syria?" The events was sponsored by the Guelph Bridging Group along with PeaceRiders.org, Council of Canadians, Muslim Society of Guelph and the Muslim Students’ Association of the University of Guelph, and on April 14, about 100 Guelphites overcame a bit of inclement weather to hear two great speakers on the subject of Syria.
First we hear from Monia Mazigh, an academic, author, and human rights advocate that chronicled her struggle to get her husband, Maher Arar, released from Syrian detention in the book, Hope and Despair: My Struggle to Free My Husband Maher Arar. Her latest book, Hope Has Two Daughters, tells a mother-daughter story against the backdrop of the Tunisian Bread Riots in 1984 and the Jasmine Revolution in 2010.
After Mazigh, we hear from Haroon Siddiqui, who is the Editorial Page Editor Emeritus of the Toronto Star and a Distinguished Visiting Professor at Ryerson University. He retired from the Star in 2015, but remains an advocate for plurality and strong voice in the struggle against Islamophobia in Canadian society.
That last item came up in speeches by Mazigh and Siddiqui, and how Islamophobia has an effect on how governments in the west are able to respond to crises in the Muslim world. The two also talk about the need for action in Syria, how Canadians have to put pressure on their politicians to take that action to bring a peaceful resolution to the conflict, and they speak out against the U.S. missile attack in retaliation of a chemical weapons attack on civilians by the Syrian government. That military action had taken less than 24 hours before the talk began.
So let's learn What Happened in Syria on this week's Guelph Politicast!


Special thanks to Open Sources Guelph co-host Scotty Hertz for recording the lecture.
If you're look for a way to help the people of Syria, there are a number of agencies that can use your time and/or money, including the International Rescue Committee, the International Red Cross, the White Helmets, and Doctors without Borders.
The theme music for the Guelph Politicast is from the KPM Klassics collection by Syd Dale.
The host for the Guelph Politicast is Podbean. Find more episodes of the Politicast here.
Remember that the Politicast Podbean channel is also the host for podcast versions of Open Sources Guelph. The previous Thursday's episode of Open Sources will be posted on Mondays.
Posted by Adam A. Donaldson at 9:00 AM