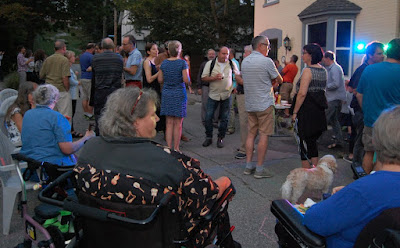 Earlier this summer, the House of Commons seemed to put the final nail in the coffin on electoral reform when the government voted against accepting the recommendations of the special Commons committee. Democracy Guelph is aiming to say though that the coffin hasn't been nailed shut. In fact, there is no coffin.
"Democracy Guelph started in February as an incubus for a national movement," said Anne Grajersky-Caulet, chair of Democracy Guelph and a former NDP candidate. "We're building a national campaign and lobbying in Ottawa because we believe this model of PR is the easiest way forward to get proportional representation in Canada."
Grajersky-Caulet was grilling as well as advocating Friday night as Democracy Guelph shut down New Street for a neighbourhood barbecue fundraiser. Music was provided, poetry was performed, and burgers, chips and drinks were all available. Many politicians were there, but not a lot of politics was talked about. However, inquiring minds want to know about where Democracy Guelph is taking the fight even though the fight seems over...
"It's only been a few months, but we've got over 3,000 signatures so far on our petition, and we'll build that and grow," added Grajersky-Caulet. "And we're meeting with MPs, and people close to the prime minister, so we're not dead by any means."
Not only is Democracy Guelph not dead, they're also busy. Next month, they're sponsoring an event with Green Party leader Elizabeth May and Wellington-Halton Hills MP Michael Chong, who've contributed to a new book called, Turning Parliament Inside Out: Practical Ideas for Reforming Canada’s Democracy. For Democracy Guelph, the way Parliament runs and the way we vote for who goes in it are issues that are hand-in-hand.
"What I'm fascinated about right now is the idea of Parliamentary reform," said Steve Dyck, a former Green Party candidate and now one of the main organizers of Democracy Guelph. "One of the things some people criticize proportional systems for is a lack of local representation, and what we're learning about right now is that the only times MPs get to speak is when their leader puts their name on the speakers list, and they get their message approved by the leader.
"My point being there is no local representation," Dyck explained. "What we've got right now is representation of leaders. It's no wonder we have a partisan disaster in Ottawa that results in bickering. And it speaks to 'do we have any local representation right now?'"
So the lesson of the evening is that this is far from over. You can listen to an interview with Dyck and Grajersky-Caulet from an episode of Open Sources Guelph earlier this year by clicking here.