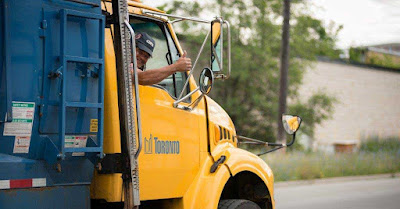 Last week, city council heard from an interim report on the first service review being conducted by staff. The result of that investigation into Solid Waste Resources was that the service is almost entirely on par in terms of delivering service for money as many of the municipalities that are compatible to Guelph. There was just that one thing though...


Yes, the Material Resource Facility (the MRF) has an over $2 million difference between how much it costs to run, and how much it makes for the City of Guelph. That's not chump change, and understandably, the employees of that facility (referred to as "The MeRF") are worried that the axe will fall on them in order to bring those costs down. Well, some outside workers down the road in Toronto can relate.
Earlier this year, the Canadian Union of Public Employees Local 416 marshalled their resources to petition Toronto City Council to not act on Mayor John Tory's proposal to privatize Toronto's garbage for all areas east of Yonge Street. Of course, former-Mayor Rob Ford famously privatized all garbage collection in the west end of the downtown during his term in office, ensuring that all areas of the city west of Yonge received private waste collection. In the end, CUPE won the right to keep garbage in the east end public, but this is still likely to be an election issue next year.
What's interesting about this debate was the emphasis not on the public/private divide, but on the case of quality of work. In other words, in terms of diversion rates, and ensuring that the recycling stream is free of contaminates, the public workers just seem better at their job then the private workers. In the end, though there may be immediate savings in terms of staffing, isn't the City of Toronto going to pay latter on by not meeting its diversion targets and filling up the landfill faster?
These are the questions we're looking at on this week's podcast, and to tackle them completely, we're going to take them in two streams. Covering things from the environmental side is Emily Alfred of the Toronto Environmental Alliance, who prepared a report on the City's diversion rates in advance of the council meeting earlier this year, and covering things from the labour side are National Representative Humberto da Silva and Solid Waste Unit Chairperson Brian Demareski of CUPE 416.
So let's take out the trash, and recycle the spin, on this week's Guelph Politicast.


If you want to read more about the Toronto Environmental Alliance's findings about diversion rates in their city, you can check out the report for yourself by clicking here. And to learn more about CUPE 416's efforts to protect their jobs, you can visit the website for their campaign "Kicked to the Curb", by clicking here.
The theme music for the Guelph Politicast is from the KPM Klassics collection by Syd Dale.
The host for the Guelph Politicast is Podbean. Find more episodes of the Politicast here.
Remember that the Politicast Podbean channel is also the host for podcast versions of Open Sources Guelph. The previous Thursday's episode of Open Sources will be posted on Mondays.
Posted by Adam A. Donaldson at 9:00 AM