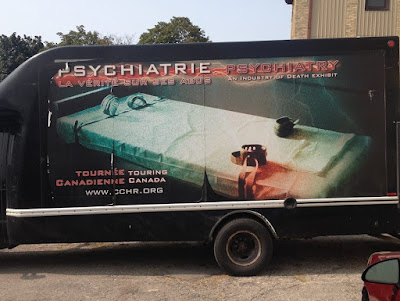 If certain sources are to be believed, the answer is yes. Edward Pickersgill, who runs a mobile version of the Out of Poverty Centre just outside its old headquarters at 40 Baker Street, says that the Church of Scientology has rented the entire building, and they're moving in.

"Church of Scientology has rented entire building at 40 Baker," Pickersgill posted Friday afternoon. "Emptying it out and moving in this weekend. And the For Sale or Lease signs were removed at about 11:45 a.m. just before we set up 40X Mobile for our afternoon shift."
Okay, so what's the Scientology connection to the truck above, which is advertising a touring exhibit called, "Psychiatry: Industry of Death"? Scientology is fairly well-known for its belief in the so-called evils of psychology, and it's been documented that the founder of Scientology, L. Ron Hubbard, may have struggled with mental illness himself, hence the institutional resentment. The organization sponsoring this exhibit, The Citizens Commission on Human Rights, is a subsidiary of the Church of Scientology, and was founded in 1969. In Los Angeles, there is a permanent museum of the same name, "Psychiatry: Industry of Death".
Now according to the Facebook page of the CCHR, the "Psychiatry" exhibit was just at the St. Lawrence Centre of the Arts in Toronto last weekend, so it's possible that Guelph is the next stop of on the "Industry of Death" tour, although there are no pending events listed on Facebook. In other words, what the Church of Scientology might be doing with 40 Baker Street is not known.
It's also worth noting that Scientology isn't new to our area. The church opened an "Ideal Org" in Cambridge on Bishop Street in 2013. According to the Scientology website, an Ideal Org is "configured to provide the full services of the Scientology religion to its parishioners, while also serving the community with social betterment and outreach programs."
Cambridge's is one of over 50 Ideal Orgs worldwide, and itself has been subject to controversy. Mike Rinder, a former high-ranking official with the Church of Scientology and one of its most outspoken critics, blogged about the Cambridge Ideal Org in 2014, noting that an entire year after it opened, an "Objectives Course Supervisor" was finally appointed to the Cambridge Org. Think of it this way: What if a church opened, and it didn't have a minister for 12 months.
The Ideal Orgs themselves have been heavily criticized for being less a sign that Scientology is growing, which it isn't, and more part of a long-term plan by the church and its head, David Miscavige, to invest heavily in real estate and promote the appearance of growth. Many reports state that the Ideal Orgs, for the most part, are empty, under staffed, and are receiving next to no foot traffic.
Meanwhile, some Ideal Orgs in Canada have had trouble getting off the ground. In 2015, the Toronto Star wrote an article about Scientology's delays in starting to renovate their Yonge Street location and turn it into a new Ideal Org. The Star also wrote about the thousands of dollars in back taxes that Scientology owed to the City of Toronto. As of this writing, there is still no Toronto Ideal Org.
Which brings us back to Guelph, and what Scientology is doing in the Royal City. It's a good question. Searching the latest Scientology news releases, there's no information about Guelph, or about Guelph, or about something happening in Guelph. Of course, Scientology is a very mysterious group, so should it be surprising that there's mystery here? Stay tuned...
Posted by Adam A. Donaldson at 3:00 PM