The "Made in Guelph" Electoral Reform Solution Workshopped 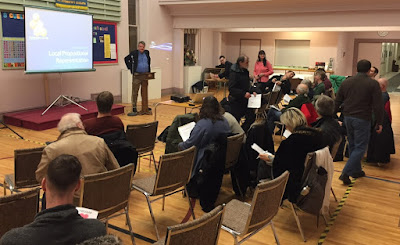 In the basement of St Andrew's Presbyterian Church, as the music from the rehearsal organ echoed nearby, about two dozen people gathered to parse the so-called "Guelph Model", an electoral reform proposal that's meant the thread the eye of several different needles in order to meet a whole lot of different expectations. But does it work?
From the multi-partisan group Democracy Guelph, the proposed system started with a number of caveats that came up when the core group met with MP Lloyd Longfield last month. The system would have to be proportional without adding to the total number of MPs and without changing riding boundaries, and the group would have to show that their plan had widespread public support. The result is something called Local Proportional Representation, and it does seem like the best of all worlds.
LPR was developed by Byron Weber Becker, a faculty member in the School of Computer Science at the University of Waterloo who testified before the parliamentary committee on electoral reform. With input from Peter Cameron, Steve Dyck, Frank Valeriote and Jean-Pierre Kingsley, Becker thinks he may have cracked the code to get all parties what they want in ER by taking something from First Past the Post, Single Transferable Vote and Proportional Representation while answering Longfield's criteria. But will a plurality of people buy it?
Let's go over Local Proportional Representation FAQ style.
How many MPs will there be?*
338, just like there are now. And all the ridings stay exactly the same. What is the riding of Guelph today will still be Guelph under LPR. The system guarantees that every riding will continue to have its own MP who is answerable to the people in his or her riding.
What makes this system proportional?*
More voting. Under LPR, between 4 and 8 neighbouring ridings will be grouped into regions. For the purposes of this example of how LPR would work, Guelph is grouped with Milton, Oakville, Oakville North-Burlington and Wellington-Halton Hills. Using a preferential ballot, everyone in this region will bet a chance to vote for MPs in all the regions ridings, which is how you get the P in LPR (that's Proportional). 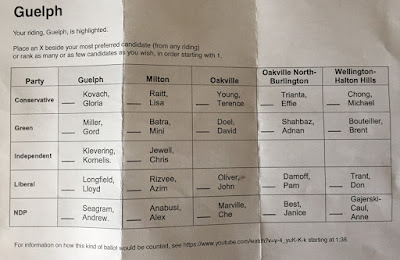 How do you vote?*
Any number of ways. You can rank the candidates from 1 to however many there are on the ballot, and you can ranks as many or as few as you want, but if you should only want to vote for one candidate, you can mark your ballot with a simple 'X' just as you always have. theoretically, you can rank all the candidates in just your riding in order of preference if you wish, or you can do a strict party line vote for all candidates across your region, i.e. vote for all the Liberals.


So how is this better than First Past the Post?
It's a nod to the fact that there are larger concerns region-wide. Theoretically, you could just vote across party lines and choose, say, the Conservative candidates in all five ridings, but if you feel the best candidate to represent Guelph is the Conservative candidate, but your more policy aligned with the Liberals, you vote for the Liberal candidates in the other four ridings. This system should promote more opportunity for a person's vote to reflect the complexities of their political views, and to promote more proportionality in the House of Commons.
How are the votes counted?*
Look at this way: in an election between two people, you need 50 per cent plus 1 to win, with three candidates its 33 per cent plus 1, and so on. To use the parlance of the industry, that's a quota. Those that meet their quota win, and any amount of votes beyond the threshold of the quota is called surplus. Through the preferential ballot, the surplus votes are reallocated until enough candidates are elected. On the other hand, there are many occasions where a candidate in the race doesn't meet their quota, so the candidate with the least number of votes is dropped out of the race, and those votes are reallocated until there's a candidate with enough votes to win. The most important thing though is that each riding is guaranteed an MP so the last candidate in the riding is never dropped.
How will people be expected to know about the policies of candidates in a whole other riding?
Part of the implementation of LPR will be to empower Elections Canada to deliver a one page flyer to each household in the "region threshold" so that voters can make a minimally informed choice. That will be an Elections Canada expense and not one made by the individual campaigns who will still be free to focus on the local race. Of course it voters want to go indepth and read local media coverage for all ridings in their ballot region that would be cool too.
What are the potential problems with this system?
Well, even Becker admits that "there's no doubt a political party is going to find ways to abuse this." Might we hear cries of "So-and-so doesn't represent Guelph because all those people from Oakville and Milton voted for him"? There may also be some confusion about the counting since the ballot offers so many different ways to cast your vote, and parties will definitely want the data to know where their vote is. It's also maybe not be as proportional as some people might like.
What are the potential benefits?
There are mechanisms in the system to further "upgrade" the proportionality if people see fit. Also, it maintains a system where the local members choose their party candidates, and it may stifle the tendency of the larger parties to recruit so-called "ghost" candidates just so they can fill ever spot on the electoral map and thus creating the opportunities for more genuine representation. The concept combines aspect of all the various electoral system, it let's people vote how they want and it maintains local representation and accountability, which is one of the big criticisms of PR with its "list seats." It also guarantees that everyone voting will have a say in who is in government, something that's hard to do with First Past the Post and the "winner take all system" we have right now.
So now what happens?
There will be a citizens' assembly on February 23 at 7 pm at eBar. Longfield will be in attendance and the LPR model will be presented to him there. Democracy Guelph is hoping to get a lot of people out that night to show support for the model and Electoral Reform in general. You can access Democracy Guelph at its Facebook page and Twitter feed for more updated info.
*Edited for clarity on February 23.
Posted by Adam A. Donaldson at 5:22 PM