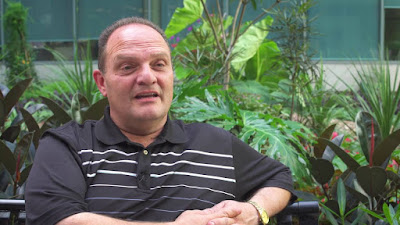 The swinging door at City Hall doth swing again as Deputy CAO of Corporate Services Mark Amorosi has taken the fall for the accidental release of over 50,000 confidential emails to legal council representing a former employee suing the City of Guelph.


"The City of Guelph has ended its employment relationship with its Deputy Chief Administrative Officer of Corporate Services, Mark Amorosi," read the City press release. "The City thanks Mark for his service and for the role he has played in positively shaping the organization over the last ten years."
It was revealed late last week that the City of Guelph handed over a flash drive containing thousands of documents and emails with private and/or confidential information about city employees, including as many as 30 performance evaluations of staff members. Staff is still trying to figure out what all was handed over, but they all came from former Deputy CAO and city treasurer Al Horsman's email. The files handed over were only suppose to pertain to a $1 million wrongful dismissal suit brought by former building official Bruce Poole.
“Notwithstanding this isolated event, for which Mark is bearing ultimate responsibility, he has made a number of valuable contributions to the City of Guelph,” said CAO Derrick Thomson. “He is a dedicated public servant whose priority has always been the citizens of Guelph.”
But still, the axe had to fall on someone. "It should not have happened, and we are conducting a review to ensure there is additional due diligence in cases where private information is involved," Thomson said in a statement last Friday. And although Thomson said in that statement that the City was pursuing "all remedies available" to recover the files, they have still not yet been returned.
To recap, Poole was the City's former chief building official. He was fired in August 2015 after 30 years as an employee of the City of Guelph with no (public) explanation, but the Guelph Mercury discovered in an Access to Information request that Poole had raised concerns with senior officials at City Hall that he might have to lay charges against the City for not following its own bylaws. The then-CAO Ann Pappert told the Mercury that there was "no connection whatsoever" between Poole's dismissal and the emails sent in July 2014 where he raised those concerns.
Poole launched his lawsuit a year ago, suing the City of Guelph for $1 million and alleging that he was fired for repeated efforts to make sure City properties comply with the Ontario Building Code. The lawsuit says, according to the CBC, that Poole suffered from a "poisoned workplace environment", which forced him to take a medical leave from February 23, 2015 to April 6, 2015, and when he returned, he was demoted from general manger to manager and his salary was cut. Poole claims that "he was criticized for his activity" and that in a meeting with the executive team in July 2014 he was "specifically and explicitly warned that the position he was taking on the building code issues may have negative consequences for his career."
In defense against the suit, the City said that Poole's position was victim of a restructuring that saw the merger of the building and planning services departments, planning services department head Todd Salter was named to the position of GM in a move that "was made in good faith for legitimate business reasons," according to a City statement to CBC March last year. "Mr. Poole was in no way targeted or singled out."
The focus of Poole's suit is on the executive team of Pappert, Horsman, Thompson and Amorosi. With Amorosi fired, Thomson remains the only person still employed by the City of Guelph. Oddly enough, the City announced that Horsman had taken a job as the CAO of Sault Ste. Marie three days before it was announced that Poole had been dismissed.
Colleen Clack will be covering Amorosi's former duties at Corporate Services until a replacement is found. The province's Information and Privacy Commissioner is now also involved in the investigation. In the meantime, a City lawyer will continue to represent Amorosi in his $500,000 suit against Guelph Speaks' Gerry Barker.
Posted by Adam A. Donaldson at 8:30 PM