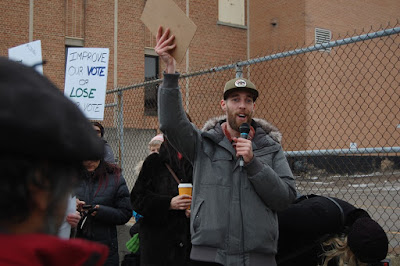 Justin Trudeau may be over electoral reform, but nearly 30 communities across Canada today wanted the prime minister to know that they've not forgotten a promise he supposedly made over 1800 times. Here in Guelph, which has taken the idea of reform to heart, well over 200 people showed up in front of the constituency office of MP Lloyd Longfield to keep pushing him to push the issue in the House of Commons.
Before the protest got underway, Shayne Ward said that he wasn't sure what the turnout was going to be. A demonstration at City Hall last Sunday saw less than 100 people brave the cold, but on a pleasant and warm Saturday afternoon, and with a week of planning and promotion versus two days for the last one, the gathering kept growing and growing until the Guelph Police Service had to shut down Cork St E between Wyndham and Norfolk.
The protest lasted over an hour and the speakers list was a who's who of active local politicos including Green Party of Ontario leader Mike Schreiner, Guelph-Wellington Coalition for Social Justice Chair George Kelly, former Wellington-Halton Hills NDP candidate Anne Gajerski-Caulry, Council of Canadians member Jane Thornton, and electoral reform advocates Steve Dyck, Susan Watson and David deWeert. The collective message was that Trudeau should keep his promise, and that the elimination of First-Past-the-Post (FPTP) is a necessity to avoid the rise of a Donald Trump-like figure to high office in Canada.

"Democracy in this country is in jeopardy, and it would seem that those in power are quite comfortable with this status quo," said Thornton, who noted that the results from the local electoral reform consultation on Longfield's website are no where to be found. Thornton also took exception to Trudeau's characterization that only the main political parties with a majority of the seats at plat allow for a sense compromise. "Historically, coalition governments are the ones that get things done, think of Tommy Douglas and socialized healthcare."
"There was a time in this country where election laws barred ethnic minorities, women, urban workers and indigenous people from participating in the democratic process; a farmer in Oxford County could vote, but not a factory worker in Toronto," said Gajerski-Caulry reaching for historical perspective on the matter. "[Trudeau] dreads fairness in our electoral system because his party will not benefit from it."
"What sets us apart is that we don't have this ideal, we look to the past and say 'This is something we can fix,' and they we're happy to go out and fix them," said Anees Munshi. "I think if there's a defining characterization of Canadians its that we're innovative, we'll find solutions and we'll fix things that are broken. Where there's a will there's a way, and clearly there's a will."
A lot of the will had to do with avoiding a situation similar to that going on in the United States. Postcards were handed out emblazoned with the phrase "Trump Loves FPTP", the current U.S. President being made an example of the "winner takes all mindset." Many of the speakers not only cited Trump, but Canadian politicians that hope to follow in his populist footsteps, specifically Kellie Leitch and Kevin O'Leary. 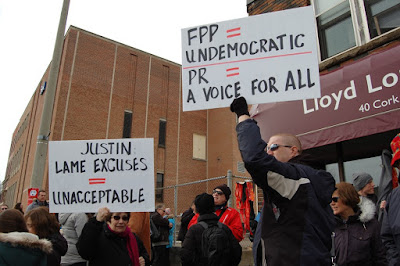 "That's the fringe that's going to take over 35 to 40 per cent of the vote and become the next prime minister of Canada, so if Trudeau's worried then that's the group he has to be worried about," said Mark Berardine, Unit President of the Wellington Ontario English Catholic Teachers Association. "Leitch says we can learn from Trump, but the only thing we can learn from Trump is what not to do, what never to do, and what we can't allow happen in Canada."
"I ask the prime minister what kind of democratic legacy do you want to leave to our children and grandchildren and their children and grandchildren?" asked Schreiner. "I want to thank all the young people who are organizing rallies in cities across the country, in many respects it's your future that we're standing up for today."
Schreiner also voiced gratitude to Guelph's MP for doing something to keep pushing the issue forward in spite of Trudeau's equivocating. "While I'm very, very frustrated and angry with the Liberal Party right now, I also want to extend a thanks to Lloyd Longfield who's at least been willing to listen and take the ideas these citizens are bring forward and take them to Ottawa," Schreiner said to applause. "What I want to say to Lloyd is now more than ever we need you to be Guelph's voice in Ottawa and not Ottawa's voice in Guelph."


The group Schreiner referred to is working on a "made in Guelph" PR strategy, but who are they? "We're citizens of Guelph, and some members of our group are dedicated partisans of the NDP, some are Liberal, one is Conservative, and a couple of Greens, but we're citizens and Canadians first. We are a group of people who want proportional representation and we want it now," said deWeerdt who spoke for the group.
Ideas are all fine and well, but deWeerdt encouraged the crowd to keep up the pressure on Longfield so that the issue stays on the front-burner. "He needs a concrete actionable proposal, he asked us for it, and we're working across party lines to achieve that," deWeerdt said. "He also needs to show that a strong majority of the people of Guelph want proportional representation, this means we need to organize and achieve thousands of signatures supporting the Guelph model for proportional representation."
And yes, this was a non-partisan effort. In the crowd, they found one Conservative who was enthusiastically supporting electoral reform, and he wasn't even old enough to vote yet.
"As a Canadian I believe furthering our democracy is a big part of this country, we uphold it all around the world, and finding the best way to have our people represented in Parliament is always a top priority," said 16-year-old Brendan Hollingsworth. "Using a system that's flawed beyond two major parties, like First Past the Post, isn't effective anymore and we do need a system that accurately gives out a percentage that each party wins.
"If we can do that in the best way possible and the easiest way possible that shows that we're furthering our democracy and I'm all for that," he added.