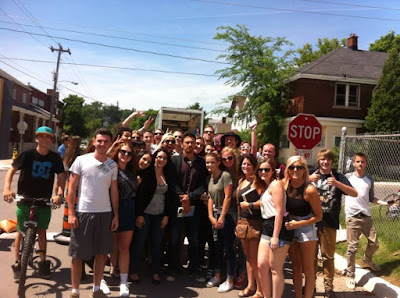 It's a pretty big week for the Ward, which is playing host to Hollywood star power in the form of James Franco. The prolific actor, producer and director is in the Guelph area shooting a miniseries based on a Stephen King novel, but in one of those truth is stranger than fiction stories, the fun and excitement of a big film shoot was interrupted by the kind of criminal idiocy that would be right at home on the long-running reality series, Cops.


As the Guelph Police patrolled Huron Street yesterday, a young man on a motorized bike tried to make his way through the the part of the street closed off to traffic. When he hit the gas and ignored the cops, they took him down and discovered that not only did he not have a license for his ride, but he had a small quantity of crystal meth on his person. Undoubtedly the reason both for his ignoring the signage, and for trying to flee when confronted by the cops.
According to a GPS press release, a 19-year-old Guelph man has been charged with dangerous driving, four counts of breach of probation, three counts of breach of recognizance and possession for the purpose of trafficking (CDSA). He was also charged under the Highway Traffic Act with drive no license and drive no insurance under the Compulsory Automobile Insurance Act.
No word about Franco's thoughts on the affair, he did play a drug dealer in the movies Pineapple Express and Spring Breakers after all.
However, the project that brings Franco to town is an adaptation of 11/22/63, based on the King novel about a history teacher that finds himself back in time and in a position to prevent the assassination of President John F. Kennedy. The miniseries is being produced by J.J. Abrams and his production company and will stream on Hulu plus sometime next year. No word on a Canadian distributor, but it's likely that it will be picked up by one of the Canadian streaming services.
Posted by Adam A. Donaldson at 4:08 PM